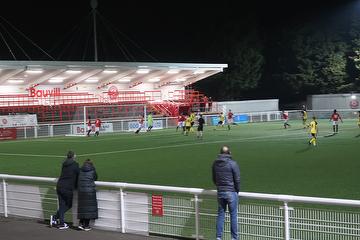 Still no joy for U18s

Tonbridge Angels Under-18’s slipped to a disappointing Isthmian League defeat at Chatham Town, going down to a single goal scored after 73 minutes.

It was a frustrating evening for the Angels who struggled with their retention of the ball, sadly for the spectators, Chatham suffered similarly and subsequently a poor game ensued.

Tonbridge had the better of the opening 20 minutes forcing a couple of corners and having a Fin Wolvey shot that was just over the bar. But from the midway point of the half it was the home side that gained the momentum with centre half Calum Scovell heading over from a corner and Matt Larkin saving a header from Tom Samwell.

Three minutes before the break, Max Lambert ended a surging run with a shot that was destined for the top corner but the Chats goalkeeper, Bobby Crabb, made a fine save turning it away for a corner.

In terms of quality, the second half deteriorated further with both sides guilty of poor distribution but with Chatham producing the moments most likely to bring reward.

The tricky Biring fired narrowly wide on 56 minutes and the equally skilful David Falako were causing the Angels defence problems.

It was a great shot from the Biring brought a superb stop from Larkin, but the goalkeeper’s parry fell invitingly to Falako who tucked home the rebound from close range for the only goal of the evening.

Angels’ substitute Hayden Velvick produced a pacy break that ended with a shot on target which Crabb did well to turn away at his near post.

Chatham finished the game the stronger and Larkin did well to deny the Falako on two occasions in the final five minutes.

Manager Dom Welsh was equally disappointed with his side’s quality on the ball and felt that if they had got that right, chances would appear but, unfortunately, it just did not happen.