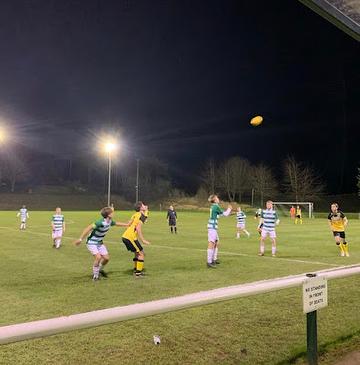 Tonbridge Angels Under-18’s came away from Gay Dawn Farm with a hard-fought, well-earned point but at the same time feeling aggrieved that ill-discipline on one hand, but in their view questionable officiating on the other, had left them a man short for the final 15 minutes of a game that they were leading 2-1.

Josh McArthur saw red after an innocuous tackle had seen his Corinthian opponent kick-out following the challenge. McArthur’s retaliation led to a multi-player melee that when brought to order saw the red card issued, a yellow for Angels Ben Morgan, but with the perpetrator seemingly walking away without rebuke.

The incident, in a game that had been competitive but without friction, led to a chaotic last quarter hour which also saw the Angels’ manager Dom Welsh sent to the stand. Such was the confusion that even the final whistle was shrouded in mystery.

Both sides had good chances in the opening minutes with the Angels’ Hayden Velvick bringing a good save out of the Corinthian goalkeeper after five minutes before the visitors opened the scoring after 11 minutes when Velvick pulled the ball back for Harry London to drive a shot into the bottom corner from the edge of the D.

The lead lasted barely two minutes when some really good wing play down the left ended with a pass across the face of the goal to the far post leaving the goalscorer with a tap-in.

After 15 minutes of a thrilling opening, London went close when his shot clipped the bar.

The game settled down with Corinthian in the ascendancy for a while bringing Angels keeper Matt Larkin into action and five minutes before the break the home side missed an absolute sitter as a cross from the right found the left winger at the far post but he inexplicably managed to put the ball wide of the post from two yards.

The second half was less than a minute old when the Angels were gifted the lead. A pass back to the goalkeeper, who had previously struggled with the ball at his feet, saw him take a bad touch and Will Saunders closing him down, seized upon the opportunity, to win the tackle and roll the ball into the net.

It was the start to the half that Tonbridge wanted and they took control of the game with Saunders and substitute Fin Wolvey testing the shaken keeper.

But the game changed with the sending off and Corinthian sensed their opportunity, although from the free kick that was given to Tonbridge after the skirmish, Morgan struck the bar.

Tonbridge were forced deep but defended doggedly until the 86th minute when a cross from the left found a Corinthian player in front of goal, he appeared to mishit his shot, perhaps that’s doing him an injustice, but the ball looped up and over Larkin and into the net.

Unfortunately, with the referee perhaps having lost control of the situation, the final minutes became a bad tempered affair with argument taking over from football although Larkin had to be alert to save following a Corinthian corner.

When the final whistle blew,the referee continued to be in the centre of the action and further yellow cards were brandished, but to whom only the referee’s report will be able to establish.

Dom Welsh declined to comment on his own sending off or other events surrounding the officials but praised his team for their desire and commitment when down to 10 men against a good team.