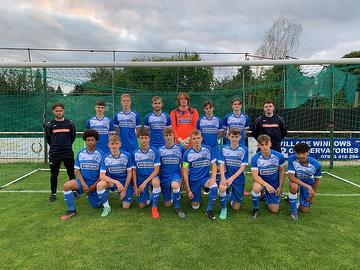 A joyous return to the Isthmian Youth League after a four year absence was not to be as the Angels’ Under-18’s found themselves 3-0 down after just 15 minutes but they gave good reason for optimism by remaining competitive for the next 75 minutes.

Manager Dom Welsh had several players unavailable and had to mix his squad with Academy players, some of whom had played only 24 hours previously.

Cray Valley are expected to be one of the better sides in the division and certainly displayed a level of performance of a team that has been together for a number of seasons.

The Angels could not of got off to a worse start conceding a poor goal after just 47 seconds when a under hit back pass to goalkeeper Matt Larkin allowed Flint David-King to intercept and round the keeper before slotting into the unguarded net.

Tonbridge’s first chance came after five minutes when Max Cormack headed over but the home side doubled their lead after 11 minutes when a clearance rebounded into the path of Harry Day who finished well from around 12 yards.

The Angels produced an immediate response but were desperately unlucky when a great effort from Cormack rattled the crossbar.

Sadly, on 15 minutes the hill that the Angels needed to climb became a mountain when a right wing cross found an unmarked Noah Joyce who finished from just inside the box.

It was a cruel start to life at this level, but to their credit, Tonbridge regrouped and worked hard to get themselves back in the game. This they did after 25 minutes when Josh McArthur’s direct run and cross was partially cleared to the edge of the box to the waiting Harry London who fired home.

Two chances just before the break fell to Cameron Wootton whose header was comfortably saved and a free kick in a good position that was fired over the bar by Ethan Knight.

The second period, with the Angels now kicking down the slope was a much more even contest with far fewer chances for both sides.

But any hope of a Tonbridge comeback were finally extinguished when Larkin misjudged a cross into that corridor of uncertainty, leaving Harry Hopper to head home.

London shot over with four minutes to play and Larkin made a fine save, turning the ball over the bar from a close range effort.

Dom Welsh said after the game that he was pleased with his side’s efforts after that disastrous opening 15 minutes and congratulated his hosts, whom he expects will be among the front runners this season.

There were plenty of Tonbridge supporters in the attendance of 90, thank you for your support.