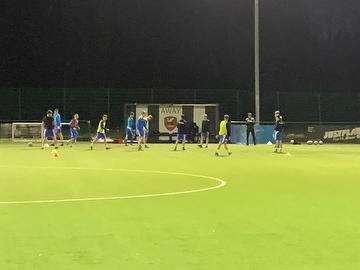 Two goals in the final minute perhaps gave an unfair reflection of the game but, there can be no doubt that K Sports were good value for their win.

A superb hat trick from K Sports’ Harry Brooker was the highlight of a match in which the Tonbridge Angels back line struggled to contain a vibrant K Sports attack.

The Angels Under-18’s got off to a great start and were ahead after just three minutes when a free kick lofted into the box saw the K Sports goalkeeper make a good save from a header but Fin Wolvey capitalised on the loose ball to score at the far post.

The joy was, however, short lived as the home side were level after seven minutes. A long punt forward saw the visiting defence allow the ball to bounce and K Sports’ Richard Munn was allowed to hook the ball into the net.

An all-action opening 15 minutes saw the Angels goalkeeper, Matt Larkin make a fine save at his near post with his feet and then save a penalty from Brooker low to his left.

Although K Sports were dominating, Tonbridge were not without their own chances with Rockie Burke heading over and firing wide.

K Sports took the lead after 32 minutes with an exquisite lob by Brooker from 20 yards that went in off the far post.

Tonbridge’s defensive frailty was exposed within a minute of the second half restart when a long cross found Brooker at the far post for an easy header.

The Angels responded well with a surging run from Harry London that ended with the goalkeeper saving at his feet and following the introduction from the bench of George Theis, good work between Theis, London and David Howie set Burke up to reduce the deficit to 3-2.

Haydn Velvick came off the bench and his pace immediately created a chance for himself but the goalkeeper smothered at his feet.

But after 75 minutes, K Sports were handed their second chance from the spot after Joe McCusker was deemed to have pulled back a K’s forward and this time the penalty was converted into the bottom corner.

Two remarkable goals in the final minute added gloss the the home side’s win when a 25 yard strike into the top corner gave the impressive Brooker his hat trick which was quickly followed by sixth when the ball was dribbled into the box before a shot was buried into the bottom corner.

Dom Welsh agreed that his side deserved nothing out of the match but it was not a 6-2 game. “We played well at times but conceded some pretty poor goals.”