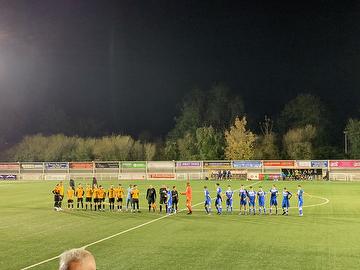 A first half in which Tonbridge Angels Under-18’s failed to cope with the height and power of an impressive Maidstone front pairing left the Angels with far too much to do in the second half when they competed far better.

Maidstone were arguably the best side that the Angels have faced so far this season, but as manager Dom Welsh lamented, “you cannot be conceding three goals from corners at this level”.

Tonbridge actually didn’t start badly and had their share of the game before going behind on 13 minutes when a lobbed pass over the defender found Tylar Sait who fired home from 12 yards past Matt Larkin.

The Angels responded well to the set back and were level four minutes later. A shot from Harry London from outside the box was only parried by Stones’ keeper Hugo Webb into the path of Max Lambert who made no mistake from the rebound.

Tonbridge needed to retain their foothold in the game for a period of time but the failure to deal with another corner saw Jaiden Flisher stab the ball home just two minutes later.

The match was very open and chances for both sides came thick and fast. Larkin saved well before Max Cormack saw his effort cleared from the line with follow-up attempts from Rocky Burke and London being blocked.

But, on 27 minutes, Tonbridge’s vulnerability from corners was exposed again as Flisher scored with an unchallenged header.

A superb through ball saw Flisher clear to fire past Larkin for his hat-trick on 32 minutes.

The other half of the dangerous Maidstone strike partnership, John Openibo saw Larkin save well and also put a header over the bar.

The second half saw Rory Kavanagh taking his place in the centre of defence with Shea Brennan moving into midfield and to a certain extent it stemmed the tide, but Maidstone rattled the crossbar and Larkin was pressed into action for several good saves.

A first time pass, best of the night, of absolute quality (from a player that deserves a name check but I can’t) split the Tonbridge back line and Joseph Terry ran on to score the Stones fifth on the hour.

Tonbridge’s substitutions, Will Saunders and Zach Garcia, brought a bit of stability for the final half-hour and whilst Maidstone continued to create chances, Tonbridge made some of their own with Lambert seeing his effort saved and they deserve credit for the way they stuck to the task to the bitter end.

But as Dom Welsh admitted after the game, “it had been a bad day at the office and beaten by the much better side on the night.”