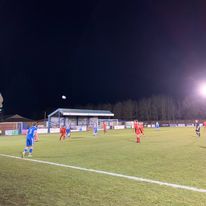 Tonbridge Angels Under-18’s slipped to a disappointing 3-2 defeat to South Park at Longmead after taking a two goal lead within the first 20 minutes.

How the game changed after being totally in control is quite mystifying but credit should be afforded to the visitors who never let their heads drop and attempted to play their way back into the game.

Tonbridge were ahead after three minutes when a through ball from Max Lambert sent George Theis clear and he finished confidently past the advancing South Park goalkeeper Charlie Duffy.

After 17 minutes the home side doubled their advantage when Isaac Barden fastened onto a poor defensive pass across the face of goal to collect on the edge of the penalty area before firing home.

Confidence was running through the side highlighted by an audacious 40 yard effort from Fin Wolvey having noticed that the goalkeeper has strayed from his line but the keeper managed to get back and touch it over the bar.

South Park had made little impression in the opening half hour but a shot from Adem Kebir that was saved by Matt Larkin gave a warning and following a corner a minute later the ball dropped to Ireson Dielka who drove in a fierce shot from 10 yards that gave Larkin no chance.

The game was far more even as half-time approached with Barden forcing the keeper into a good, low save whilst at the other end a free kick was deflected away to safety.

The early part of the second half saw two efforts from full back Sam Grant, the second of which needing a goal line clearance.

The major turning point in the game came after 68 minutes when Tonbridge substitute Zach Garcia was felled in the box for the awarding of a penalty. Skipper Harry London stepped up, his shot was cleanly hit but Duffy brought off a magnificent save, diving to his right.

Three minutes later, the Reigate-based side were on terms when Kebir was clear down the left and executed a perfect lob over Larkin.

Garcia was making a good impression from the bench and tested the goalkeeper with a shot from outside of area and a jinking run along the bye-line nearly presented a chance, but with five minutes to go it was the visitors that stole with points when a ball into the box was stabbed home by Raul Corben from around 10 yards into the bottom corner.

Dom Welsh bemoaned his team’s inconsistency at present, in fact throughout the season, “we play well for periods but concede such poor goals.”