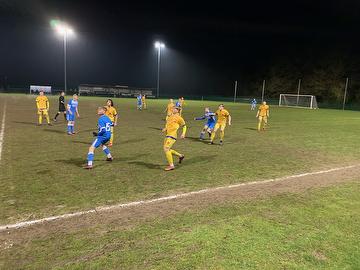 Promising signs for U18s despite another defeat

Despite the 3-0 score line there was much to admire about a resilient performance against an outstanding Sutton Common Rovers side that in all honesty should go on to win the league at a canter.

A late goal gave a score line that flattered Sutton Common a bit, although they were kept at bay by a magnificent goalkeeping performance from Matt Larkin which included a penalty save.

New signing William Puffette added some steel to a central defence that had conceded six goals on each of their last two outings.

Even on a difficult pitch at Colliers Wood United, Sutton Common moved the ball around with the confidence of a team that remain unbeaten after 10 games and are just two points behind leaders Cray Valley with four games in hand.

But, in fairness, it was the Angels youngsters that started the brightest with Ethan Knight firing wide after four minutes and George Theis, in particular, giving the home defence some concern.

After the opening quarter hour, Sutton Common asserted themselves on the game and it took some resilience from the back line to deny Harry McKnight and a box of tricks on the right side in Emile Janois.

Tonbridge’s best chance of the half fell to Theis after 34 minutes who was sent clear by Zach Garcia but his attempted lob only fell into the hands of Toby McKimm.

Three minutes later the Angels were rueing that missed opportunity as the home side took the lead. A free kick was only partially cleared and the ball was put back into the box from where Ben Oluno was able to hook the ball home.

Larkin produced two excellent saves in the closing minutes of the half to keep the deficit at just the single goal.

Larkin excelled again in the early part of the second half with two fine saves, the second one an exceptional turn over the bar from a 20 yard shot.

Tonbridge suffered a set back just prior to the hour when influential captain Harry London had to be withdrawn with a shoulder injury.

On 65 minutes, the Angels big chance to get back into the game came when a free kick from Garcia found the head of Puffette, but the centre back’s effort was just over the bar and once more they were made to pay immediately as at the other end, a cross from Janois could only be parried by Larkin into the path of McKnight who had the easiest of tap-ins.

Sutton Common were awarded a penalty after 75 minutes when Janois was brought down but Larkin, for the second game in a row, brought off a great save, diving to his left.

A fairly long injury delay followed when Sutton Common’s McKnight needed to be stretchered off with an ankle injury. An ambulance was later called for the player but thankfully it is understood that there is no break.

Larkin was continuing to excel, turning over an effort but from the resultant corner, Oli Hampstead glanced in a header for the home side’s third goal.

Dominic Welsh was naturally pleased with his side commenting after the game: “The result probably doesn’t reflect it but a much more resilient performance from the boys tonight. SCR are an outstanding side, who train full time and had 10 second years in their starting XI. In comparison we had none in our squad and had four Under-16’s on the pitch at the end.”