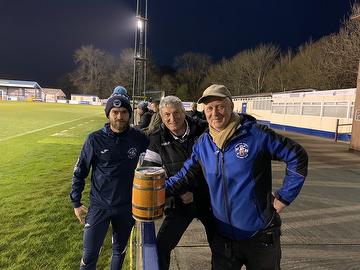 Report and picture : Wink Tomkinson  Andy Matthews and Pete Elves receive a refreshing gift for their efforts in maintaining the stadium pitch for the U18s

On the sacred Longmead carpet for a final time and, potentially the last team to play under these floodlights, Tonbridge Angels Under-18’s produced their most resilient display of the season to secure a point from a goalless draw against a very good Glebe side who will finish fourth this season.

It was very much a backs-to-the-wall display but so well did they defend that captain for the day, Matt Larkin, in the absence of the injured Harry London, had only one serious save to make but thoroughly deserved his clean sheet for his very capable handling of anything thrown into the box.

Whilst Glebe didn’t stretch Larkin overly, they had several chances which were narrowly wide, the first of which coming in the 9th minute when a header from a corner passed just past the far post.

It took a long time and some stout defending before the Angels were able to mount an attack of their own from which Ethan Knight fired over, although George Theis and Haydn Velvick, who had been the victim of a couple of tight offside calls, had worked tirelessly to relieve some of the pressure on the back line.

Larkin made his big save of the half to deny Glebe’s Finlay Boyule with four minutes left and a couple of minutes later the impressive Chris Newell flashed a pass across the face of goal that found nobody in front of goal.

Dom Welsh managed to get his side onto the front foot in the early part of the second period and following a free kick, Will Puffette’s header needed saving by Ollie Siberski.

Glebe regained the initiative and it was back to resolute defending as near misses from Alfie Moynes and Simon Mbuaibe ensued but on the break Velvick twice went close.

But, the Angels youngsters stood firm and manager Welsh derived a great deal of satisfaction from the performance commenting after: “Really pleased with our defensive performance which has come on leaps and bounds in recent fixtures, not a game with many chances but a well deserved point against a class side with some very good footballers.”