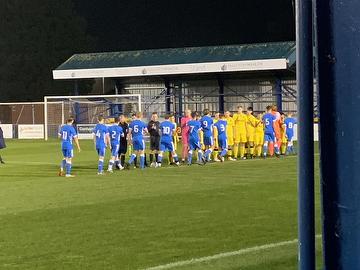 Angels U18s have to settle for draw

An exquisite finish from K Sports Harry Coiling, seven minutes from time, earned the visitors a point from a competitive match at a rain soaked Longmead Stadium on Monday evening.

The opening 10 minutes were a good indication of the way the game was going to unfold as an even contest. K Sports’ Mitchell Smith had the opening shot on target with Fin Wolvey testing Taite Holtam for the Angels.  But, after 13 minutes it was the K’s that opened the scoring when Mackenzie Gardiner cut in from the left and from an acute angle fired into the bottom corner.

K Sports drew confidence from the goal and Coiling drew a good save from Matt Larkin with Toby Henley completing the clearance. Coiling was proving a real handful and on the half hour he capitalised on a defensive error but his shot narrowly cleared the bar and five minutes later he drew loud appeals for a penalty that was waved away by the referee.

Tonbridge eased their way back into the game in the closing five minutes with Wolvey firing a free kick over and Rockie Burke forcing the K’s goalkeeper into a good save. But the equaliser came on the stroke of half-time when good work from Sam Grant ended with his cross finding George Theis running in at the far post to touch in.

K Sports had the better of the exchanges in the early part of the second period with Larkin saving well but it was the Angels who took the lead after 57 minutes when a free kick into the box from Joe Wallis saw Theis glance a header past Holtam.

A spectacular shot from around 35 yards from K’s Toby Sargent only just cleared the bar, but after 81 minutes, the Angels thought they had won the game when great work down the right from Burke ended with substitute Hayden Velvick’s shot being partially spilt by the keeper with Theis tucking home the rebound. But the referee disallowed the goal having deemed that Holtam had retrieved the ball and the Tonbridge centre forward had kicked it out of his hands.

Two minutes later, the scores were level again when the ball was given away by Tonbridge and Coiling fully capitalised with a lob from the right hand angle of the 18 yard box over the head of a stranded Larkin.

Tonbridge pressed hard for a late winner with Burke bringing a brilliant save out Holtam but it was not to be and, in fairness, a draw was a fair result.

Manager Dom Welsh felt that the game could have gone either way and despite the quality of the second goal he was disappointed at the manner in which the ball was turned over. He felt his side are making steady progress despite their inexperience, with 10 first year’s starting and another on the bench alongside two under-16’s with only one second year starting.