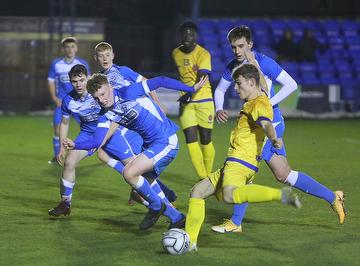 Sutton Common Rovers showed their division-winning credentials in a first half of total dominance. Our Youth lads made a much better fist of the second half and battled hard to the very end but it was a case of holding up your hands and admitting they were beaten by a really good team, the best we’ve seen this season.

A mixture of Tonbridge resilience, couple of good saves from Matt Larkin and some wasteful finishing kept the game scoreless for 24 minutes but two goals in the space of two minutes gave SCR the lead that was more reflective of the game.

Although the defending at set pieces was an improvement on last week’s game at Maidstone, it was that vulnerability that cost the opening goal when a right-sided corner was met by a powerful header from SCR’s skipper Oliver Hamsted that gave Larkin no chance.

Two minutes later a low cross from the right was turned into his own net by Luca Bradley, under pressure at his near post.

Tonbridge did well to get to half-time with the scoreline remaining the same with Larkin saving from the dangerous Jonah Wall.

The second half started in much the same vein with Larkin saving again from Wall but the Angels wrested some of the momentum away from their visitors and Toby McKimm in the SCR goal was asked to make his first save from Ben Morgan.

Larkin produced a great save at his near post just past the hour but he was helpless after 67 minutes when the ball fell invitingly to Wall to finally win his personal contest with the Angels’ keeper.

As with the first half two goals came in quick succession and a good build up down the left ended with Bobby Moore having an easy close range finish.

It is great credit that the Angels lads heads never dropped and they were well worth their consolation goal, six minutes from time, when a well flighted free kick from 16-year-old George Rayner was headed home by Joe McCusker.

Dom Welsh was suitably fulsome in his praise of his opponents after the game commenting: “It was a tough evening against an outstanding side. Probably the best side we will play all season, credit to everything they did. Excellent in possession and just as good out of it. Our boys worked hard but fell short. But, it’s good experience for the future that we finished the game with eight first years and three under-16’s on the pitch.”