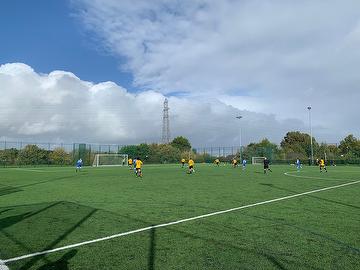 Report and picture from Wink Tomkinson

Ultimately Tonbridge Angels found the winning goal but both sides deserve to take credit for producing a competitive game in atrocious weather. A howling wind was matched by downpours of Noah proportions. Even the supposed resilience of a 3G surface was stretched to its limits as standing water began to collect in one corner.

The game, as said, was always competitive but the quality was compromised by the elements. In fact, it was the outstanding piece of quality that produced the winning goal.

Tonbridge dominated the possession for much of the game but in 10 minute spells Kennington provided a serious threat.

The best chance of the first half fell to Max Cormack after 41 minutes but he pulled it wide.

It is on occasions like this that you have to admire the fortitude of the parents who get up each Sunday morning to drive their offspring to wherever and then spend the next couple of hours on the touch line getting soaked through to the skin.

Chances opened up in the second half and, thankfully, the rain relented. Kennington had one of their spells either side of the hour mark creating three good chances with Matt Larkin saving well with his feet and the Kennington supporters thought they had their noses in front as the net rippled but the shot had hit the side netting.

The winner came on 83 minutes from a move of pure quality. Fin Wolvey knocked a superb crossfield pass to the right from where Luca Bradley produced a pin point cross to the far post where he found Rocky Burke whose precise shot nestled in the net just inside the far post.

Dom Welsh was happy to earn a place in the Third Round commenting: “I think we probably had 70%+ in terms of possession but failed to break down 11 behind the ball, which is natural and never easy. They played direct, on the break and created some chances as we had to push players forward. We said at half time that one goal wins it. It’s never easy when teams put everyone behind the ball but I’m pleased with the clean sheet and into the next round.”