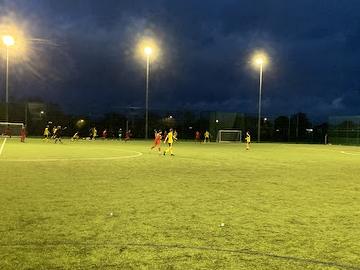 U18s out of Kent Youth cup after close encounter

Tonbridge Angels Under-18’s bowed out of the Kent County Cup as Phoenix Sports mounted a stirring comeback in the second half to turn a 3-1 half-time deficit into a 4-3 victory.

At a damp, cold Mascalls, on Sunday afternoon, Tonbridge took an early lead when a good move ended with Will Saunders being bundled over inside the penalty area for Fin Wolvey to convert from the spot.

If anyone doubted the competitiveness of this cup tie that was dispelled as Phoenix roared back from their setback and Matt Larkin needed to be at his best saving low to his left but parity was only to last another minute as the tall Phoenix right midfielder struck a well placed shot into the bottom corner from the edge of the box.

Tackles were full bloodied, no quarter given or asked as the two teams genuinely went toe to toe but it was the Angels who regained the lead on the half-hour when Billy Kent cut in from the left before firing in a shot that took a deflection and looped into the top corner.

Tonbridge were now the dominant side with Sam Grant going close before, five minutes before the break, a long punt downfield from Larkin caused the Phoenix central defenders some difficulty and Kent capitalised by winning the challenge, running through on goal before slotting the ball past the goalkeeper to score despite the best efforts of a defender on the line.

Phoenix Sports came out for the second half with renewed vigour but it was the Angels that went closest in the opening exchanges as the goalkeeper did brilliantly save from Max Lambert and then save the rebound from Grant and, from the resultant corner, Joe McCusker struck the bar.

But having survived going three behind, Phoenix took control of the game and the Angels were left to desperately defend for long periods without respite. Such pressure was inevitably going to lead to a goal and just past the hour mark, Phoenix were right back in the game when the Phoenix midfielder scored his second of the game with a towering header from a free kick.

The Angels were barely getting out of their half and were giving away free kicks in dangerous areas as the pressure mounted. Phoenix eventually got the equaliser they deserved with seven minutes remaining when from a corner the ball was bobbing around with no Tonbridge player able to make a clearance before it was poked home from close range.

Having got back to level terms, Phoenix showed no sign of settling for penalties and despite some dogged defending from the Angels they found a winner in the 90th minute to progress to the semi-finals.

A magnanimous Dom Welsh afterwards paid tribute to his opponents but also felt that tired legs with only having one substitute available had left his side unable to withstand the pressure.