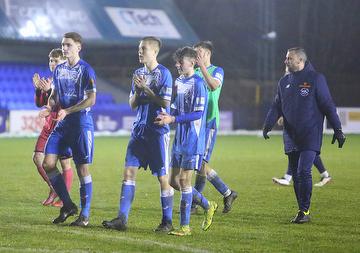 Angels Boss, Steve McKimm had promised to go with some Academy players for the Kent Senior Cup 2nd round tie against Maidstone United and so it proved with no less than eight changes from last Saturdays starting  line up for the FA Trophy clash with Bromley.  Only Beere, Fielding and Lovatt survived with McKimm, Woodhouse, and Tyrie making their first Angels starts and Hermitage and Green on the bench both of whom were to play a part.

There was controversy in the opening three minutes when Maidstone goalkeeper Harvey Earle miskicked and Angels' Olutade picked up the loose ball.   With the goal opening up in front of him Elokobi made a heavy but in the eyes of the referee a fair challenge that brought the winger to the floor injured. After a lengthy stoppage, Olutade appeared to recover but after a few minutes had to leave the field to be replaced by Hermitage.  It was to prove a significant change.

As the game settled into something of a pattern, it was Tonbridge who were playing the more fluid football but Maidstone seemed to have the strength up front sensing perhaps that Tonbridge had a changed defensive line up and were there for the taking.

There was a good spell for the visitors around the 30 minute mark with McKimm forced into a double save.  At the other end lone striker Coombes was receiving good support from Woodhouse, substitute Hermitage and Smith-Joseph while Lovatt and Loft in central midfield were pulling the strings for the Angels.  On 45 minutes a teasing cross from Hermitage was cleverly converted by Coombes who used some improvisation to head home past Earle for what was to prove to be the only goal of the game.

Smith-Joseph, always a great outlet with his pace, on 56 minutes crossed into Coombes but the goal scorer couldn't quite double his account and the ball went out for a corner.  On 65 minutes those two players both had shots in quick succession but Earle saved both efforts.

By now Angels were starting to look quite comfortable with efforts from Taylor who had replaced Lovatt, Hermitage and substitute Green all giving Maidstone plenty to think about. The visitors continued to press when they had the opportunity but the Angels defence was in mean mood with Fielding, Tyrie, Beere and O'Sullivan always getting the better of the Maidstone forwards and Loft giving fantastic protection to the back line. Mention should be made of McKimm in the Tonbridge goal who had a fine game with a clean sheet to mark his first competitive appearance for the Angels.

Afterwards Steve McKimm said: "I was delighted for our young players this evening who I thought all did excellently and fully deserved the win. I'm pleased to be going through as it will definitely give these players another chance to show what they can do.  A word for the senior players out there today who worked incredibly hard and used their experience to help us through to the win.  It was a fantastic team performance."