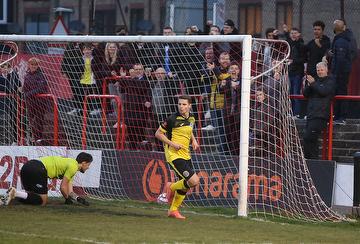 Angels involvement in the Kent Senior Cup is over for another year as the wait to win that trophy continues in a competition they last won in 1975.  That said they can be proud of their performance with a side that included three youth players, Joe Tyrie, Luca Woodhouse and Ben Hermitage together with other 1st team players who for various reasons had not been featuring regularly in the seniors.  They took a more experienced Welling United side all the way to a penalty shoot out which was eventually lost 3-4.

It was a difficult 1st half for the visitors who couldn't really get much possession and were forced to do a lot of defending.  Despite that Angels took the lead in the 9th minute when a glorious cross from Aaron Smith-Joseph was met with a firm header from Jake Embury.  Welling were however creating numerous half chances but the visitors defence was working well with Angels keeper Toby McKimm doing all the right things and commanding his area with confidence.  On 13 minutes Welling had a goal disallowed for offside and despite their overall dominance had to wait until the 39th minute before they levelled the score through Saunders-Henry.

There was something of a response from Tonbridge with Doug Loft prominent in those attacks but the score remained level at the break.

Three minutes into the second period Hermitage put in a decent  header that was just wide from Olutade's cross and Angels were suddenly up and running. There was a nervous moment for the hosts when a cross came into the Wings box but nobody in a yellow shirt could get a touch. Despite their improvement Angels were suddenly on the back foot when Welling were awarded a penalty in the 58th minute.  Mckimm proceeded to make a terrific save to keep the scores level and with everything now to play for Angels were starting to look the better side.  On 70 minutes great work by Embury who somehow managed to keep an attack alive when the danger for Welling seemed, over slipped the ball to Olutade who got his foot round the shot to send a 10 yarder into the Welling net.

Angels had the lead but could they keep it or indeed increase it?  The answer seemed to be increase it if they could with efforts from Woodhouse and Turner just wide but then Welling were awarded another penalty which this time they managed to convert to level the scores.  McKimm kept Angels in the game with a fantastic save in the 88th minute and in stoppage time Turner coming in on the angle saw his shot go just over the bar.   Despite the efforts of both sides it was a penalty shoot out to decide who was going to go through to the semi final.   The spot kicks were levelled after the statutory five attempts and so to sudden death with Welling scoring their sixth and Angels missing theirs.  Its a cruel way to exit any competition but there was no disgrace in the Angels performance.

Angels Boss Steve McKimm said afterwards, " Very proud of all the boys this evening who were up against some experienced players.  I'm not sure I got the set up right in the first period, but second half we changed it and you could see the improvement.  Its disappointing to go out of course in the way that we did but everyone should be very pleased with their efforts."