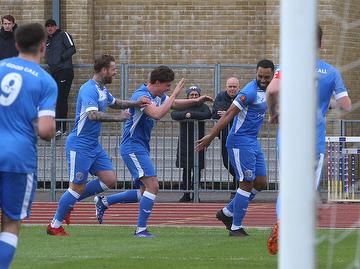 Angels pick up another point on the road

The season is starting to come to its final conclusion and here were two sides who find themselves at the wrong end of the table. Sometimes although managers and players would probably always deny it, the fear of losing takes precedence over the will to win and this was how it seemed at the EMG Inspire Stadium.  Two evenly matched sides played out a 1-1 draw in a game that never really reached great heights with too many displaced passes constantly disrupting the flow of play. The decent football on offer and there wasn’t too much of that was arguably played by the visitors but even they know they can achieve more and certainly the gusting wind didn’t help proceedings.

On 20 minutes good hold up play by Tommy Wood played in Angels Joe Turner whose effort from 20 yards was just over the bar. Ten minutes later Jerry O’Sullivan for the visitors sent in a good cross but Wood’s header was just wide.

In the 37th minute the Angels gained their first corner which was followed by a pinball session in the Clarets box but eventually a clearance allowed the hosts to break quickly and it was now Tonbridge who were forced to concede a corner.  The ball wasn’t properly cleared and eventually through arguably a piece of good fortune Chelmsford opened the scoring.

On 38 minutes the Angels responded with a clever Turner chip which was only saved by a goal line clearance by a defender.

The final action of the half saw Wood once again In the thick of the action just missing out on converting a Craig Braham-Barrett cross although an assistant’s flag would have ruled out the goal.

The second half started with the Angels very much on the offensive.  The supporters from Kent didn’t have to wait long their side’s equaliser. A rather innocuous foul on the edge of the Chelmsford area set up the chance and while most would have expected Turner or Beere to have taken the kick with both standing over the ball it was the third man  in the vicinity Adam Coombes who stepped up and fired a fierce shot which although the Chelmsford keeper got hands to, the sheer pace of the ball beat him and the net rippled.

Adam Coombes continued to be the danger man with on 68 minutes nearly on the end of a clever Woods pass and then a couple of minutes later getting a shot away that beat the goalkeeper but grazed the outside of the post.

Braham-Barrett was often the main outlet for The Angels with his runs down the left wing but the Chelmsford defence were by now determined to not let anything further slip and it was the same at the other end which comes back to our earlier point  around fear of losing.

Afterwards, Angels Boss Steve McKimm was pleased with the point. “Yes it brings us closer to safety and these are all big games until we get ourselves in a position that’s impossible for us to be relegated.  We have Welling United in the Kent Senior Cup on Tuesday and some of our youth players will be involved in that fixture and then we prepare for Slough’s visit on Good Friday. Delighted for Coombesie with his strike. He has great technique with no backlift which can catch keepers out.  Thanks to all the supporters who travelled in numbers today.”