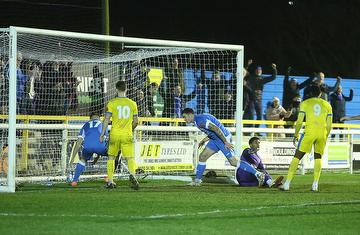 Two sides battling to ease their relegation fears perhaps predictably played out a draw in a game that was somewhat scrappy and had few moments of genuine quality.

With Adam Lovatt being recalled suddenly by his parent club, Sutton United, Doug Loft was restored to the Angels midfield, while Jerry O’Sullivan was preferred to Jamie Fielding at right wing back.

It was an opening 45 minutes that was played at a furious pace by both sides but in their haste there were too many mistakes and too many misplaced passes.  The game never really flowed and because of that few clear cut chances were created.

Angels will perhaps be slightly more satisfied as they managed to force keeper Myles Roberts into two fine saves. On 32 minutes Joe Turner was clean through and his strong and on target shot was brilliantly pushed round the post by Roberts and three minutes later Adam Cooombes saw his strong header well saved by the former Angels keeper.

Eleven minutes into the game Taylor’s shot was blocked with Turner getting to the rebound but his acrobatic effort was just over. Two minutes earlier Tom Beer’s corner was met at the back post by Tom Parkinson but the downward shot bounced over the bar.

Concord did have some chances of their own notably one by Nana Kyei but it was saved by Jonny Henly at the expense of a corner  and also a couple of free kicks on the edge of the area but both dealt with by the Tonbridge defence.

There was little improvement in the 2nd half with much of the action taking place in a congested midfield.  On 54 minutes Turner put Coombes through but the Angels striker was just beaten to the ball by a Concord defender. Three minutes later James Taylor played Turner in but Roberts saved to maintain the deadlock.

On 75 minutes Turner had a shot which deflected for a corner and it began to look as if Angels supporters were going to witness another goalless draw but two minutes later and somewhat against the run of play Concord took the lead.  A free kick just inside the Tonbridge half was not properly dealt with by Tonbridge and the chance was eagerly taken by Lewis Simper.

There was a positive response by the team from Kent and a series of corners and long throws tested the Concord defence to the extreme. In the 85th minute Substitute Aaron Smith-Joseph executed a dangerous looking free kick that Roberts just about managed to tip over the bar.  The resultant corner was played back to James Taylor whose pass to Tommy Wood found the striker just in that little bit of space that allowed him to poke the ball home for a very welcome Angels equaliser.

Afterwards, Angels Assistant Manager Barry Moore said:  “It was a scrappy affair and in the circumstances we have to be reasonably happy to come away with a point.  Tommy Wood thrives on those kind of chances although I thought Adams Combes also had a good game up top.  We now have to prepare for Chippenham Town this Saturday who no doubt will be seeking revenge for that away win we had at their place back in January.”