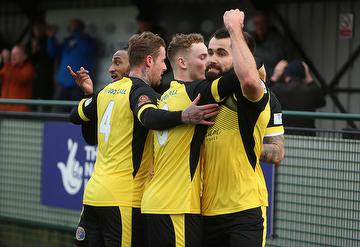 Angels do the Double over League Leaders

Angels helped to ease their relegation fears by repeating their 3-1 success earlier in the season by overcoming a Dorking side by the same score, with their hosts coming off the back of 10 straight League victories.

Angels Boss, Steve McKimm, brought James Taylor into the Angels midfield and Sonny Miles making a club record breaking League starts of 377 appearances was restored to the back line having been unavailable last Saturday.  Harry Hudson and Adam Coombes dropped to the Bench.

An opening five minutes saw both sides test the opposing defences but no real chances were created.  That all changed in the 8th minute when a high through ball caught the Angels defence square and there was Alfie Rutherford to finish with some quality.

A minute later a Tom Beere effort was easy for Dan Lincoln in the Wanderers goal and then it was the turn of Dorking to apply the pressure with chances for James McShane and Josh Taylor.

It was really all Dorking at this stage with the Angels defence having to work very hard to prevent their hosts from going further ahead; Rutherford just after the half hour mark should have added to his goal tally.

Angels did manage to ride the storm and Beere saw his corner flash across the goal line with no one available to supply the finishing touch but this was merely for starters as on 36 minutes the ball was fed in from the right flank and there was Joe Turner who turned on a sixpence and saw his low shot creep into the left hand side of the net.

There was the expected response from Dorking with a chance for Matt Briggs but Angels now had genuine belief and shots came in from Tommy Wood and Luke Jenkins.

As half time approached there was drama which was perhaps to have a bearing on the outcome of the game.  Tommy Parkinson who was attempting to shield the ball was brutally brought down by Barry Fuller and the referee had no hesitation in showing a straight red card to the Dorking skipper.

The second half opened with Dorking having a great chance to restore their lead but it wasn’t taken and it proved to be a very expensive miss.

The Angels were starting to take control of proceedings with Beere and Wood  both having chances and winning a succession of free kicks from interesting positions. One of those free kicks saw a Wanderers defender deflect the ball on to the bar and Wood prodded home the rebound for the Angels 2nd and the lead.

James Taylor for the visitors got a shot away from the edge of the area on 65 minutes and four minutes later Jenkins had a good chance but saw the effort go just over the bar. Wood on 74 minutes with the goal at his mercy should have made the game safe but contrived to blaze over when very well placed.  It didn’t matter since a minute later the same player netted Angels 3rd from close in after  Lincoln could only parry away a fierce shot from the right.

To their credit Dorking kept plugging away but Angels were in no mood to undo all their fine work and they saw out the last 15 minutes in relative comfort.

After the game, Angels Assistant Manager, Barry Moore said he thought his side fully deserved the three points.  “Yes you can talk about the dismissal which in my opinion was justified, but the fact is before that we were matching them and felt we could get something from the game.  The lads in there are confident and rightly so, but its only one game and after this evening we have to concentrate on Eastbourne Borough and then Bromley on Saturday, both huge games.”