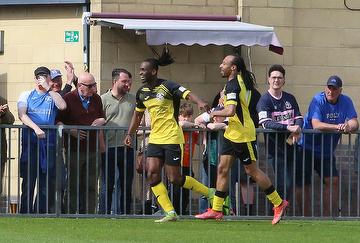 Angels grabbed a vital point at Champion Hill but perhaps it could and should have been so much better as 10 men Dulwich Hamlet came up with an equaliser in stoppage time.

Angels had been good value for their one goal advantage with a performance that was unrecognisable in the positive sense after their capitulation on Good Friday against Slough Town.

As often with these games where much depends on the result with Tonbridge in their efforts to pull away from the drop zone and Dulwich to somehow get themselves in the play off positions, it was a cagey opening.

On nine minutes Aaron Smith-Joseph delivered a cross that was just out of reach for Ibrahim Olutade and a minute later Dulwich were awarded a free kick just outside the Tonbridge area but it was fired over.

Ricky Modeste for the visitors was starting to create some room on the right wing but one of his more dangerous moves was only to result in Doug Loft blasting the ball out of the ground.

After 15 minutes Craig Braham-Barrett was booked for a foul and the resulting free kick put the Angels defence into trouble but somehow they managed to clear their lines.

Hamlet now started to take the game to their visitors and a number of flowing moves spelt danger for Tonbridge but the defence was working hard and gradually Angels started to turn the tide with a number of moves of their own and much better possession.

On 36 minutes another of those moves proved very profitable when Aaron Smith-Joseph’s cross from the left saw Olutade momentarily lose  his marker and slide the ball past Grainger for the opening goal.

Angels managed to maintain the lead relatively comfortably for the reminder of the half but would they be able to keep their slender lead for the remainder of the game or perhaps increase the advantage.

It looked as if it could be the former as the game entered stoppage time with no further change to the score line.  Indeed there had been good chances for Olutade,  Turner, and Beere and with the extra man advantage - Vint had been dismissed for pulling back Olutade when through - the odds perhaps favoured the team in the yellow shirts.

However Dulwich were by no means a done force and the longer the game went on the better they organised themselves with a man down. Increasingly they were getting the crosses in and while Jonny Henly made three superb saves, there were Tonbridge defensive blocks and various efforts just wide there was a feeling that this game would go all the distance.

As the game entered stoppage time it looked as if the Angels would claim a vital win but in the 92nd minute yet another cross came in from the Dulwich left and it was Hamlet’s Danny Mills who rose highest to at last get the better of Henley and claim a share of the points.

Angels supporters will have been disappointed to see their team concede and lose a winning position so late in the game,  but this was a squad that was full of endeavour, strength and at times good footballing creativity so different from last Fridays affair.

Afterwards, McKimm said : “Obviously I’m disappointed to come so close to winning but proud of the way the lads played this afternoon, I thought they all did excellently. I suppose I have to say that as the game reached its conclusion perhaps we didn’t take enough care of the ball, we were a bit hurried and maybe even nervous. However, following Friday’s game I have to be pleased overall.”