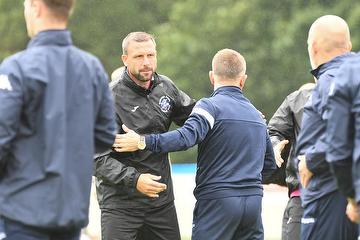 McKimm: "We can beat anyone on our day"

Steve McKimm believes his side can compete with anyone they come up against this season in the Varanama National League South, which begins on Saturday 14 August with a trip to the Kuflink Stadium to face Ebbsfleet United.

“It’s going to be a very hard game. They are a very, very good side, but I class ourselves as a good side.”

Pre-season has not been without its challenging results for Tonbridge, but McKimm is confident the squad is ready for the opening day.

“We’ve changed a few things this year, trying to do something different, and it depends what we do against Ebbsfleet in terms of shape. But whatever happens we’ll defend very, very well to try and keep a clean sheet.”

McKimm is preparing for his eighth season as Tonbridge Angels boss, and as always, the target is to improve on last year’s result.

“I won’t look further ahead than the next game that comes along. I’ll deal with that game, then when that game is finished, we’ll digest that and assess it, and then we’ll move on to look at the teams we’re playing next.”

It was 20 years ago this year that McKimm signed for Ebbsfleet as a player – and the Angels boss has fond memories of his time there.

“That was a very special club to me,” he said. “I did my knee when I played for them and they looked after me. We got promotion when there was no National League South – it was just Ryman Premier into the National League. We got them promoted and I was part of that. It was the first time in 20-odd years that they’d been promoted. I stayed there for five years and we stayed in that league, which was fantastic. So, fond memories – the supporters are very good.”