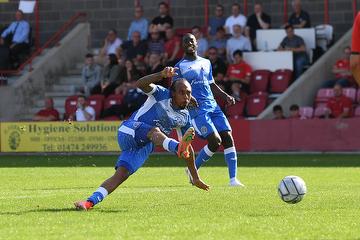 This was always going to be something of a special occasion just so much more than simply the opening game of a new season. Footballing friends meeting again for the first time perhaps in 18 months, the noise, the anticipation and the primary colours of red and blue of the two sides facing each other in front of over 1,000 fans all combined to create a unique feeling.

But there was a game of football to be played and after a moment to mark the campaign against racial prejudice the referee blew his whistle and the 2021/22 campaign began.

We didn’t have to wait long for some genuine action just 7 minutes in fact but from an Angels perspective it was at the wrong end.

A surging run by Poleon who rounded O’Sullivan made his space and drove his effort perfectly past Henly for the opener.

There followed two more dangerous Ebbsfleet attacks and then on 14 minutes a through ball scythed through the Angels back line and although there was a slight suspicion of offside there was no linesman’s flag and there was Bingham with a straightforward task of converting to double the home side’s advantage.

Angels were reeling and the Fleet were keen to press home their superiority even further.

Just 12 minutes later that man Poleon inflicted further damage to the visitors with a perfect lob over Henly who must have been wondering where his defenders had disappeared to.

On 28 minutes Poleon completed his hat trick with a breakaway goal that left Angels chasing shadows.

At last on 39 minutes Angels fashioned a chance with a Tom Beere corner headed back across goal by Tommy Parkinson with Sonny Miles about to pounce on the loose ball but Fleet goalkeeper Gould was there to snuff out the danger.

Almost on the half time whistle Ricky Modeste for the Angels let fly with a shot that only just cleared the crossbar.

It was a sobering 45 minutes for the Angels and probably they will have been relieved to reach the sanctuary of the dressing room.

The second half was to be something of a damage limitation exercise for the visitors. In this respect they were not entirely unsuccessful. The introduction of Zak Guerfi and Ibrahim Olutade brought a little more balance to the side and both those players were involved in what was ever only to be a consolation. On 74 minutes a run by Guerfi down the right flank produced a cross with Modeste able to fire at Gould with Olutade on hand to knock the rebound in. Cue cheers from the Angels faithful.

Either side of that goal Angels possession improved although whether that was because Fleet were having a breather in the heat was difficult to tell.

The home side however gradually worked themselves back into the ascendancy and if there was even the slightest doubt of the final outcome that was ended in the 81st minute. Mekki made good progress down the left flank and produced an excellent strike on the angle that nestled into the far corner of the goal.

And that was that although Henly continued to be heavily occupied in helping to keep the score line to sensible limits.

In the following days there will be much to learn from the match video to reveal why Angels started so badly even taking into account that the Fleet are a full time side. Nothing of course is settled in August and if valuable lessons can be learnt from this emphatic defeat by a promotion favourite then it will not have been an entirely wasted afternoon.

“We’ll move forward from that [the second-half result],” said McKimm after the game. “It’s the first game and as I’ve said to the boys, no one likes losing any game. To lose in the manner we did in the first half hour – that wasn’t us.”