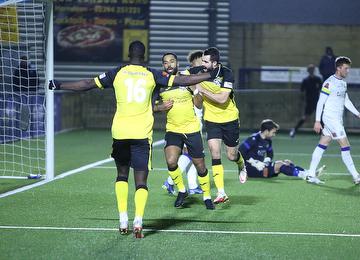 Angels swoop down on Hawks late on

Angels deservedly picked up a point at Havant & Waterlooville but left it late with their equaliser timed at 92 minutes.

During a goalless first half Havant shaded possession but Angels had the clearer chances.

After just two minutes Joe Turner was through on goal but Worner was out very quickly and safely gathered the ball.

On 18 minutes there was something of a bombardment in the Tonbridge area but the visitors were able to clear their lines quite comfortably.

Tommy Wood so full of confidence these days then created a couple of chances for himself but just the wrong side of the post from his perspective.

Joe Turner and Wood were combining well up front and the visitors on the half hour mark were starting to put some decent moves together.

A Havant corner on 32 minutes saw the resultant header drift wide of the left hand post but then it was mainly Angels who looked more likely to score with Craig Braham-Barrett making a dangerous run down the left flank and then three minutes later making progress deep into the Havant area but lost control of the ball at the vital moment.

Havant's best moment of the half came when Alex Wall' who was well placed header saw his header just loop over the bar on 39 minutes and then there was just time before the break for Tom Beere to see his effort go just wide.

It was a different Havant that emerged for the second period and for the first 20 minutes of the half they pushed Tonbridge back and forced them into some desperate defending. Eventually on 57 minutes the goal came from a corner that Joe Oastler made no mistake with firmly heading the ball past Jonny Henly although there was a suspicion that the Angels keeper may have been impeded.

Three minutes later Henly was again to feature making a huge save that kept Tonbridge in the game.

The problem thence forward for Havant was that they seemed unable to consolidate their position and allowed the Angels to steady the ship and work their way back into the contest.  Steve McKimm changed the system, strengthening the forward line and around the 75 minute mark the visitors were starting to assert themselves.  Turner put in a great cross that just eluded substitute Aaron Smith-Joseph and soon after Turner was again involved when he forced a terrific save from Worner.

On 85 minutes Turner was just wide with an effort but the pressure continued on the Havant goal and on 92 minutes a Jamie Fielding cross caused confusion in the Hawks defence and there was Adam Coombes with good strikers anticipation close in to force the loose ball over the line. Heartache for Havant but totally deserved for the Angels.

Afterwards, Assistant Manager Barry Moore said: "Delighted with the result which was fully deserved in my opinion. Its a good group of players and they should be proud of themselves.  There's even some in there who are a touch disappointed they didn't get the win."