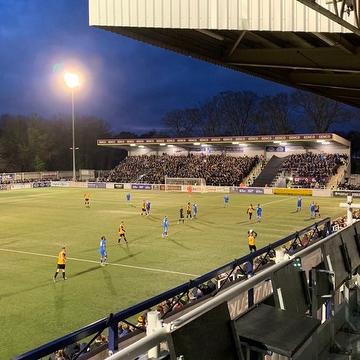 Angels go down to Derby Double

The Angels fell to a second Christmas defeat at the hands of our A26 neighbours, Maidstone United at the Gallagher, who after a run of six straight wins rise to the summit of the National League South table.

For a half-an-hour, the visitors gave as good as they got, but once Maidstone took the lead on 34 minutes, they took control of the game and a second before the break left Steve McKimm’s side with a second half mountain that they were unable to climb.

McKimm shuffled his strike force bringing Aaron Smith-Joseph back into starting line-up for Adam Coombes, who was unavailable. Jamie Fielding and Doug Loft also returned for Tom Beere and Harry Hudson who took their places on the bench.

The opening 10 minutes were a struggle for both sides with neither coming to terms with a stiff wind that eventually brought heavy rain for a period. Passes were overhit with regular abandon as the pitch almost appeared two sizes too small.

Tonbridge were the first side to soil either goalkeeper’s gloves as Joe Turner’s cross-cum-shot was comfortably dealt with by Tom Hadler and, after 22 minutes, a long throw from Luke Jenkins caused confusion in the Maidstone defence before Brown turned the ball away for a corner.

The Angels had a golden opportunity to take the lead two minutes later when a cross from the right saw first Loft miss his kick and, perhaps distracted by Loft’s attempt, the ball fell to Tommy Wood who also failed to make a clean contact with the ball.

Just past the half-hour, Wood knocked the ball forward for Turner to run onto but he was closed down by the advancing Hadler who blocked the ball with his body just beyond his penalty area.

Sadly for the Angels, with two opportunities having come and gone, it was the home side that took the lead on 34 minutes when the ball was played square by Jack Barham into the path of Dom Odusanya who drove an unerring shot from 20 yards into the top corner.

Tonbridge failed to get to the break with a single goal deficit when, in the final minute of the half, Tommy Parkinson misplaced a back pass towards his goalkeeper from the far right touchline and Barham latched onto it and crossed for Joan Luque who was left with a tap in at the far post.

McKimm replaced Jerry O’Sullivan for Craig Braham-Barrett for the start of the second period and the Angels started on the front foot with a header from Turner being collected by Hadler.

The vast majority of the second period saw the home side seemingly content to hold what they had and Tonbridge not really having the guile to open up their defence although Jenkins went close with a header.

The game, which at times had been tetchy, was probably ended as a contest six minutes from time when Loft was shown a red card for a high challenge.

The home side saw the game out with a couple of chances falling to Odusanya, who saw his shot well blocked by Henly and to Barham who fired wide.

A naturally disappointed Steve McKimm commented after the game that “they punished us when we made a couple of mistakes, they held on and defended resolutely.” And reflecting on his side’s position in the table:  “Of course we’re in a relegation battle, we’re third from bottom. We were before the game. The fans were great again but we have to give them something to cheer about.”