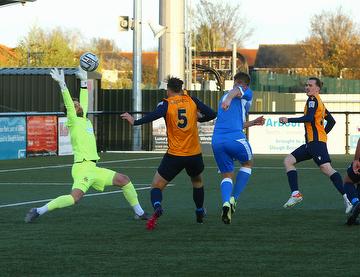 The famous poet Sir John Betjeman wrote, perhaps somewhat controversially, “Come friendly bombs and fall on Slough” but it was bombs that fell on the Angels in the form of goals, two in fact which consigned the Kent side to a pointless journey back home.

Tommy Parkinson was injured so that meant a starting place for Harry Hudson, Aaron Smith-Joseph reverted to the bench with Jamie Fielding his replacement and Jake Embery started as the lone striker.

During the sixth minute of play a moving tribute was paid to 6 year old Arthur Labinjo-Hughes cruelly murdered by the person who should have been caring for him.  A Birmingham City fan, he will no longer be able to join in the excitement and fun of watching a football match.

It had all started so well for the visitors with the ball worked into dangerous areas and bringing efforts from Joe Turner and Jake Embery making his first start.  Making just his second appearance, Embery didn’t have to wait long to open his account.  A poor clearance by a Slough defender saw the ball fall to him which he proceeded to accurately dispatch past Rebels keeper Jonathan North on just 8 minutes.

The Angels were not content to sit on their lead and seemed determined to build on this encouraging start with the promptings of Doug Loft in the heart of midfield giving the Slough defence plenty of work to do.

Although an injury to Ricky Modeste on the half hour meant he had to be substituted it didn’t affect the Angels overall performance with his replacement Ibrahim Olutade working his magic and Embery continuing to look dangerous.  Joe Turner was quite magnificent seemingly covering every blade of grass.

There was a brilliant save from North on 31 minutes following Embery’s effort while there was a piledriver just wide from Tom Beere 6 minutes later.

Slough had largely been ineffective and it was almost a surprise when they drew level on the stroke of halftime following a long throw that just wasn’t dealt with properly by the Angels defence, Alfonso Tenconi getting the final touch.

The old mantra ‘a game of two halves’ once agin proved to be the case as it was a very different Rebels side that took to the field after the interval cuppa. By contrast, Angels seemed to have lost that spark that made them such a competitive side in the first half.

They never really gained control of the midfield areas and too many passes were going astray.  There were occasional raids into the Slough half. Turner’s free kick was blocked on the line, Olutade had the ball in the net but it was offside, and on 53 minutes Sonny was unlucky with his shot following a free kick which somehow Slough managed to snaffle away.

But it was the Rebels who were starting to create an increasing number of chances. On 74 minutes Jonny Henly in the Angels goal made a magnificent save to deny conceding what would have been an own goal but two minutes later Slough at last took the lead.  From the Angels perspective it was a poor goal to concede as it came about from a Slough breakaway with insufficient players left to defend the home goal. The scorer was Aaron Kuhl.

Now Angels were chasing the game but it looked as if it would be Slough who might well score the next goal.  That said there were chances for Tonbridge as the clock ran down. North was forced to tip over a Beere free kick on 85 minutes, 4 minutes later with the goal gaping and free in the box Olutade somehow contrived to place his header wide, and in stoppage time substitute Tommy Wood was in a dangerous position in front of the Rebels goal but seemed to get the ball stuck under his feet.

Based on their second half performance you have to say that Slough probably deserved the three points but that said Tonbridge had sufficient chances to at least draw or even win the game.  Its the same old problem of not converting those chances.

Angels Boss, Steve McKimm was pleased with the performance of his new striker, Jake Embery, but he knows more reinforcements are needed and he continues his search for new signings.