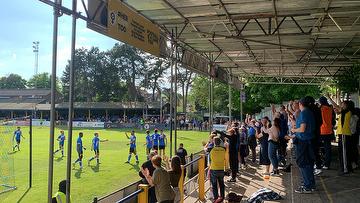 Happenings off the pitch had rather dominated the few days leading up to this final fixture so how would the players respond. The Angels faithful needn’t have worried as the players put in a performance full of skill and courage to claim a first ever win at Clarence Park.  It may well be the last sighting of some of these players in an Angels shirt but if it is to be goodbye then they will have left on a deserved high.

An estimated 100+ supporters made the journey to Hertfordshire and were making plenty of noise as the game kicked off.  They didn’t have to wait long for an excuse to turn up the volume even higher.

Within the first couple of minutes there had been pressure on the Saints goal when keeper Johnson fumbled the ball with Turner on to it in a flash. Play continued around the hosts goal area before under pressure the hapless Thomas Bender put through his own goal and Angels took the lead.

There then followed the predictable response from St Albans with goals coming in the 13th and 19th minutes to put the home side in the lead.  You couldn’t argue with the score line at that point as the hosts had been moving the ball into dangerous area with precision.

But Angels on this sunlit May afternoon were not simply here to make up the numbers in a game that to many was simply a ‘dead rubber’.  They engineered their way back into contention with sound defending, and a variety of clever through balls that constantly had the St Albans defence back peddling. In particular the pace of Joe Turner and the vision of man of the match James Taylor were instrumental in gradually turning the Angels fortunes around.

Chances came to Aaron Smith-Joseph, and  Tom Beere but it was a crunching yellow card foul on Joe Turner that was to prove instrumental in the Angels gaining parity. Jonny Henry launched the free kick deep into the Saints penalty area with Smith-Joseph finding space for a rasping shot which Johnson did well to parry. Angels re-cycled the ball with Turner providing an exquisite cross for Adam Coombes at the back post to nod home with deadly accuracy.

Angels certainly weren’t content to simply have respectability with a draw and made their intentions clear right from the start with a Turner effort an inch wide.

In a repeat of the first half Smith-Joseph and Beere both went close but the hosts were still very much in the game with a Tonbridge post struck in the 56th minute and Banton just off target in the 62nd minute.

Turner had been a constant menace and once again he was found wriggling through the home defence into the penalty area where he was unceremoniously brought down. It was an easy one for the referee who had no hesitation in pointing to the spot. Turner picked himself up and played an unstoppable shot past Johnson to put Angels into the lead in the 72nd minute.

Three minutes later at the other end Henly was called into action with a superb save but with the ball still not properly cleared O’Sullivan was right place right time clearing off his goal line.

There was still time for Taylor to come close to increase the Angels account but his strike was just over the bar.  Sound game management saw Tonbridge safely negotiate stoppage time and as the referee brought the regular season to an end the points belonged to Angels.

Afterwards Tommy Parkinson who had led the team praised his players. “I would like to thank the players from 1 to 11, the subs and those team colleagues who helped me in the dugout. It was a fantastic performance. Also special mention to Academy player Joe Tyrie who I thought was excellent at centre back and gave one of the league’s top scorers Shaun Jeffers a fairly quiet afternoon. Thanks to the supporters who turned out in numbers this afternoon to cheer on the team.”