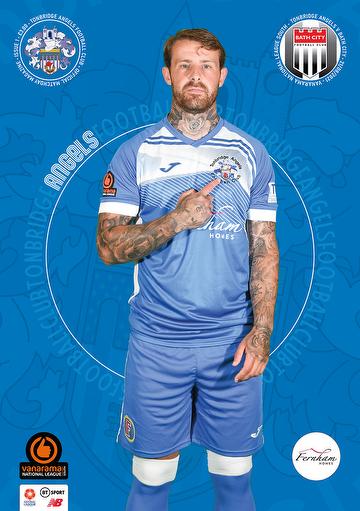 We welcome Bath City to Longmead for the first time since a 1-1 draw in January 2014.  With the last two seasons being curtailed Bath haven't visited Tonbridge since we returned to Vanarama National League South.  Our last meeting was in August 2019, a 0-0 draw at Twerton Park.

Last season was a disappointing one for today's visitors with just four wins from the thirteen matches that had been completed before the season was halted.

Perhaps that is why Jerry Gill brings a much changed Bath side which opened up the new campaign with a comprehensive 3-0 win over Billericay Town with two of the new signings scoring on their debuts.  Mo Touray gave Bath the lead two minutes before half-time with a left foot drive which just tucked in between the keeper and the near post, Cody Cooke's deflected effort made it two midway through the second half and Alex Fletcher netted the third in stoppage time with a driven shot across goal.

Touray, on loan from Salford, and Cooke, from National League Weymouth, are perhaps the men to watch while defender Ben Gerring, a summer addition from national league Woking, is another signing indicating Bath's intentions this season.

There is a full rundown of their squad in Saturday's matchday programme, plus a look at recent meetings, and a manager profile, as well as Steve McKimm's notes and Boardroom Diary.   At just £3.00 its going to be a great read.   If you purchase a ticket on line you can also reserve a copy of the programme to pick up when you arrive at the turnstile.  Just go to https://www.tonbridgeangels.co.uk/buy-tickets and scroll down the menu to the Bath City fixture.