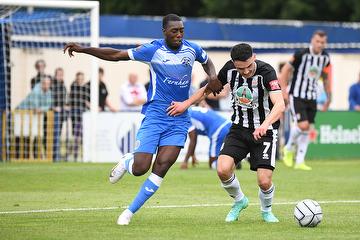 Romans take all the points

An early goal for Bath secured three points whilst Tonbridge looked comfortable in possession, but unable to find the clear opportunity to score.

Angels started brightly in the first minutes, with Ibrahim Olutade going close as his shot was comfortably saved from a difficult angle. Bath broke quickly with a ball over the top as Cody Cooke finished cleanly into the right-hand corner in the 8th minute.

Aaron Smith-Joseph showed his pace advantage on the left wing, comfortably beating Bath’s right back before hitting the side netting. Minutes later Smith-Joseph ran the entire length of the pitch with the ball before his cross was intercepted before reaching Ricky Modeste.

Cooke nearly doubled Bath’s lead as hit hard shot from the edge of the box was collected calmly by Jon Henly before half time.

Angels looked to be pushing for the second goal of the game as they piled on the pressure in the second half as Bath sat back and defended their lead.

Tonbridge pushed forward as Modeste and Jerry O’Sullivan sent balls into the box from the right wing. But Tonbridge failed to find the clear-cut opportunity to find a leveller as Bath held a solid back-line and cleared everything coming forward.

Angel’s stifled Bath’s attack in the second half, their only opportunity came as Alex Fletcher shot over the bar from range.

Man of the match: Ricky Modeste was at the centre of every attacking opportunity.