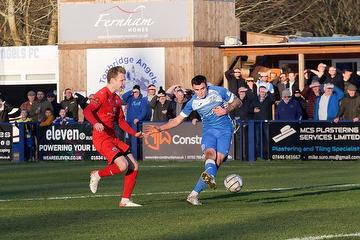 Angels gained a precious three points in their quest to move away from the relegation zone and it was the substitute Tommy Wood who was the hero of the hour but this was a solid performance by the squad who in the end were rewarded for their patience and perseverance.

Steve McKimm went for a 4-3-3 formation with Jake Embery, Doug Loft and Ibrahim Olutade all unavailable through injury and Harry Hudson serving the first of a three match suspension.  The manager drafted in Ben Hermitage and his son Toby as substitutes along with striker Tommy Wood in contention having recovered from injury, and defender Jerry O’Sullivan.

There was an early scare for the hosts in the 1st minute when a Josh Wright corner was headed onto the crossbar by Dylan Gavin.  On 7 minutes Aaron Smith-Joseph produced an in swinging free kick from the edge of the area that almost caught out Zaki Oualah with the ball drifting just wide of the left hand post.

Billericay were having the best of the first 15 minutes without producing any clear cut chances.  On the 20 minute mark however the Angels started to come more in the game winning three successive corners.  The 21st minute saw Angels James Taylor combine with Jamie Fielding to get behind the Billericay defence but the final cross couldn’t find a Tonbridge player.

Angels Joe Turner had a couple of efforts and there was a snap shot from Tome Beere but straight at Oualah.

On 34 minutes there was a decent break from Billericay  but the final pass through was too far in front of the onrushing Femi Akinwande.

The second half definitely belonged to the home side although there was an anxious moment for the Angels when on 49 minutes Wright’s corner and Stevens’ header was grabbed at the 2nd attempt by Henly.

After that the home side always looked comfortable in defence and took their opportunities to put pressure on the Billericay defence.  Turner had two good efforts and then Tom Beere had a screamer form 25 yards that was excellently saved by Oualah.

It was however the introduction of Tommy Wood in the 69th minute that was to turn the game decisively in favour of the home side. On 78 minutes an Angels free kick saw the Tonbridge striker in acres of space in front of goal,was then allowed to turn and shot past Oualah.

Eight minutes later the game was put to bed when Wood was put through and scored his second with deadly accuracy.  He was denied a hat trick in stoppage time by a linesman’s flag but the result was never in doubt by then.

Afterwards McKimm said: “It wasn’t a great game of football but we got the points that we needed and we’re very happy with that.”

Photo by Wesley Filtness of Tommy Wood scoring Angels' second goal. All Angels' photos can be found at www.wezpix.com (All match photos available to buy)