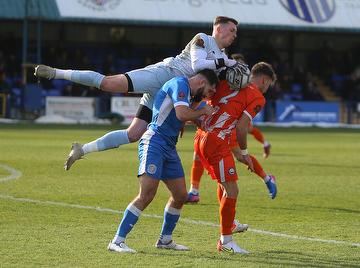 Before the game there was a moving tribute including a one minute’s silence to recognise the victims in the terrible Ukrainian illegal invasion.  The match that followed was perhaps disappointing but we should remember we are fortunate to be able to watch football and live in relative normality while millions in that European country have had their lives totally disrupted with many losing everything.

It certainly proved to be a frustrating afternoon for both sides that does little to move either club to safety in the National South relegation battle.

It was a very flat first half with neither side able to produce any genuine periods of superiority.  The visitors arrived with a reputation of having a strong defence but in truth they were never severely tested  by an Angels attack that was distinctly lack lustre.  It took until the 36th minute before the home side tested keeper Johnson with James Taylor shooting well from the edge of the box forcing the custodian to push the ball round the left hand post.

It was a similar story at the other end where when after 8 minutes Holness shot high and wide when well placed and on 19 minutes Brsintree’s best player in the first period Ilic was just wide with a low effort.

The overall standard of play in the second period saw only a marginal improvement. Angels created a great chance virtually from the kick off  involving Wood, Turner and Beere but the effort was ruled out for offside. Ilic and Critchlow for the visitors came close to breaking the deadlock and the hosts were grateful to Tupper for saving an effort from Clements.  Ilic again for Braintree in the 75th minute forced the Angels keeper into a good save and on 78 minutes Fielding and Coombes combined well to nearly open up the visitors defence but it remained goalless.

As the clock ticked down both teams  became more desperate to try and claim all the points but too many passes went astray from both sides and the game always seemed to have goalless written all over it.

Afterwards, Angels Boss Steve McKimm said : “ I’m pleased with the clean sheet and pleased with the point but disappointed we failed so many times to get the basics right in terms of passing and crossing.  I do expect my players to do better in those departments and there will need to be an improvement as of course we have another important fixture at Concord Rangers on Tuesday evening.”