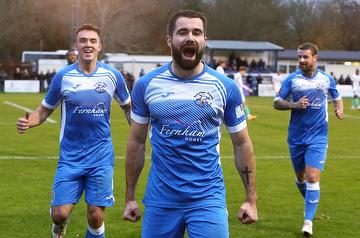 Tonbridge Angels were the better side in a tight contest between 18th and 19th in the National League South but were unable to seal three points.

The opening 10 minutes of the game were tentative with both teams failing to hold any meaningful possession. Yet it was the Angels that had the opening chance of the game as a loose Chelmsford ball was collected on the edge of the box by Ricky Modeste. The Grenadian international could not capitalise on the opportunity, dragging his shot wide.

Chelmsford were almost reduced to 10-men early in the game as the opposition’s captain Tom Wraight lunged in late on Joe Turner, but the referee only deemed the foul worthy of a yellow card.

The 23rd minute was action packed as Cameron James had a header rebound off the bar from a Chelmsford corner. Angels then surged up the pitch with Jamie Fielding sending a ball into the middle of the penalty box. Joe Turner jumped higher than goalkeeper James Dillon with his header nestling into the bottom left corner of the goal, ending Angels’ 6-hour goal drought.

The first half ended with Chelmsford in possession, their best chance fell to Chez Isaac who overhit a cross from Simeon Jackson which evaded every player in the box.

Chelmsford started the half in search for a goal, with Michael Spillane having a shot from outside the box saved comfortably by Jonathan Henly. Soon after, Wraight caught the end of a through ball but Fielding stood firm and blocked his shot.

Chelmsford equalised in the 61st minute as a loose freekick from Henly eventually fell to Charlie Sheringham who had his shot blocked. The ball dropped kindly to Simeon Jackson on the edge of the box and his shot rebound off the post into the net.

The visitors almost took the lead 4 minutes later as a solo run from James saw him evade every Tonbridge player before his final shot was blocked at the last second by Harry Hudson.

The game ended with Tonbridge piling on the pressure but lacking the big chance needed to find the winner. Tom Beere had Angels’ best chance from a long-range freekick. Chelmsford keeper James Dillon made hard work of a simple catch, just managing to punch the ball away. At the other end Henly comfortably saved Callum Harrinson’s curling strike before Sonny Miles made a vital last-ditch tackle to deny Sheringham who broke through the lines.

Tonbridge Angels remain 18th in the National League South and play their next fixture away to Canvey Island in the second round of the FA trophy on 27 November.