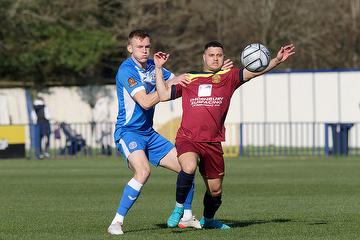 It was a much needed three points for the Angels who at all times looked comfortable against their visitors from Wiltshire.

Angels Boss, Steve McKimm went for a double strike force of Tommy Wood and Adam Coombes and it proved a good decision bearing in mind both those players got on the scoresheet.  Joe Turner played just behind the front two and Jamie Fielding was restored to right wing back with Doug Loft and Jerry O’Sullivan who both started on Tuesday at Concord Rangers dropping to the bench.  It was good to Ibrahim Olutade having recovered from injury able to be in the squad.

The first period saw the home side largely in control with the Bluebirds restricted to occasional breakaways but with no actual chances created.

In the very 1st minute Turner for the home side saw an effort just wide of the top left hand corner of the goal with Henry scrambling across. The Angels faithful didn’t have to wait long for their side to open the scoring which came in the 11th minute with Wood collecting a free kick deep into the Chippenham box. The visitors clearly were trying to play him off side but the Tonbridge striker turned and shot past Henry with no flog raised.

On 26 minutes Fielding’s deep cross just eluded the goalscorer Woods and five minutes later Coombes and Turner combined but the latter’s shot was just over the bar. With Tonbridge continuing to largely control affairs, Parkinson had two chances at the back post from set pieces but good defending kept the score to just the one for the hosts at the break

Chippenham came out for the second half with more intent and forced a save from Angels keeper Henly after 48 minutes and three minutes later Lwal attempted to lob the Tonbridge keeper but missed the target. Normal service was however resumed on 53 minutes when Coombes and Wood combined well to set up Turner but the Chippenham keeper blocked the shot.

Three minutes later the result was sealed when Beere delivered a well flighted free kick and Coombes running in fired past Henry. It was Henry who stopped Tonbridge increasing their score on 78 minutes when he brilliantly stopped Taylor’s point blank effort from close range. The game by then was over as a contest as the Angels comfortably saw out the contest with no real risk to their clean sheet.

Afterwards, Angels Assistant Manager, Barry Moore said : “Very pleased with all the squad today who all played their part in a well deserved win.  Even those who didn’t get on, never complained and continually encouraged their team mates.  Togetherness makes this collection of players a really strong unit.”

Picture: by Wesley Filtness of Man of the Match Teddy Perkins battling for possession.  Wesley Filtness's photos of the Angels can be found at www.wezpix.com  (All match photos available to buy).