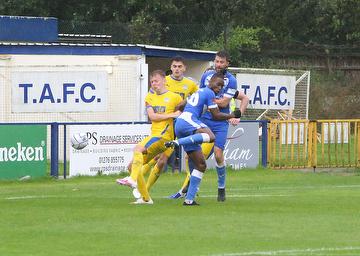 Concord Rangers may consider themselves somewhat fortunate to claim all the points in a match where for long periods they were on the back foot. That said they defended with determination to repulse numerous Angels raids on their goal and with the game reaching its final stages you always have that chance with a breakaway and thats what happened in the 87th minute with Ben Allen getting the final touch.

An understandably frustrated Angels Manager, Steve Mckimm said after the game: “It was disappointing to lose in the way we did after playing so well for much of the game but these things happen. If we continue to put performances like that in on a regular basis we will be fine.”

Chris Search, Concord’s manager accepted that Tonbridge had played well. “With the wind in our favour 2nd half we thought we would go on and control proceedings but it didn’t quite work out like that. The weather certainly played a part in our winning goal.”

Two goals in three minutes saw honours even at the break although it was the home side who had made most of the running during the first 45 minutes. Inspired by the running of Joe Turner playing just behind the two strikers, Angels were able to set up a number of chances that just couldn’t quite be converted these mainly coming from crosses from both flanks.

Turner himself was unlucky with two efforts mid way through the half but on 37 minutes was not to be denied when he was set up by Ibrahim Olutade who had beaten the offside trap and subsequently made no mistake from 10 yards out.

Concord for their part were mainly on the defensive but potentially looked dangerous on the break as it proved on 32 minutes when Ben Allen forced a double save out of Angels keeper Jonny Henly. It was a warning which came back to haunt the home side just six minutes later when following an attack down the right wing Joe Payne took the cross in his stride and equalised for the Beach Boys.

The second half continued in much the same vein with Tonbridge making most of the running despite falling behind just after the break through a David Green header. They were not behind for long however with Olutade evening things up with a clever strike at the back post.

Angels thought they had taken the lead on 64 minutes when Tommy Wood forced the ball home following a corner but it was disallowed the referee adjudging a push on keeper Roberts.

With time running out it looked like a draw was coming but following a couple of slips on the greasy surface from Harry Hudson and Jonny Henly, Allen for the visitors ran through and scored that vital winner.