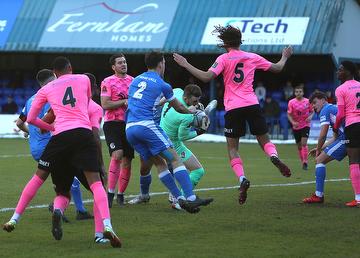 A priceless three points for Dartford has put them back in the promotion hunt but they were made to work hard by a Tonbridge side who gave the visitors a nervous last few minutes.

Luke Jenkins back from injury started while Adam Coombes was also rewarded with a start following his late equaliser on Wednesday at Havant & Waterlooville.  James Taylor dropped back to the bench, while skipper Sonny Miles was unavailable.  Tommy Parkinson wore the captain’s armband.

It was a very comfortable first half for Dartford who raced into a 2-0 lead in the first 20 minutes.  On 12 minutes Danny Leonard picked up a pass on the right wing and cut in beautifully skipping past Craig Braham-Barrett to place a fine shot past Jonny Henly in the Angels goal.  The midfielder was to repeat his feat just 8 minutes later when put through by Ade Azeez and again beating Henly this time from a more central position.

Possession was being shared equally between the two sides but it was always the Darts who looked more comfortable and more likely to add to their score line.  It wasn’t until the very last minutes of the half that Angels presented a little more intent up front with a half chance for Adam Coombes and headers from Joe Turner and Tommy Wood but the half definitely belonged to the visitors.

Within 7 minutes of the restart Tonbridge had pulled a goal back through Tommy Wood fed by Turner and the game then became a much more even affair.  Tom Parkinson for the hosts had a chance with a far post header and at the other end Azeez forced a tremendous save out of Henly.  The Angels continued to press with opportunities for Beere and Olutade but it was Dartford who increased their tally with a tremendous free kick by Jebb on 86 minutes.  There had been controversy over the award itself but the goal stood. It appeared to have been an accidental clash of heads but the referee took the view that a foul had been committed and awarded the free kick in what was an extremely dangerous position.

Angels were not done yet however and in stoppage time Olutade converted  a Beere free kick and there was still time to see Dartford having to clear a shot off the line before the referee brought proceedings to a halt.

Angels Boss Steve McKimm bemoaned his team’s lack of effort in that first period.  “This is a local derby and I expected and wanted much more application from the players.  You can’t be giving away two goals to a team like Dartford because you’re giving yourself a mountain to climb.  Yes we bullied them 2nd half but its a great free kick from Jebb and they’ve had to clear one off the line at 3-2 deep in stoppage time but that 1st half performance you could say cost us.”