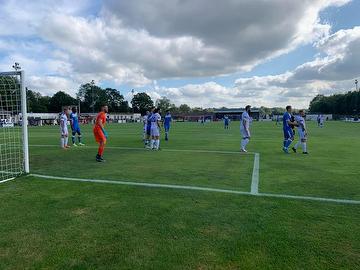 Angels put in a spirited performance to secure their first home win of the season to Dorking Wanderers.

Angels set the tone of the game in the early minutes playing to a high tempo and showing their game plan of maximising crosses and set pieces. In the opening minutes Joe Turner sent a freekick to the back post which was met by Jerry O’Sullivan, his attempt was cleared off the line by Dorking’s Bobby Joe Taylor. The quick nature of the game signalled Angels’ attacking intent throughout the first half.

Doug Loft was at the centre of Angels’ attack, collecting the ball in the middle and expertly distributing the ball wide. Angels opened the scoring in the 20th minute as Craig Braham-Barrett collected the ball. The wing back held up play, before cutting inside and sending his cross into the centre of the box with Loft beating his man, sending his header into the bottom right corner. A worthy goal for a player who could have easily been given the man of the match himself.

The Angels defence put in a superb performance all game, commanded by Sonny Miles and Tom Parkinson. They made just one mistake in the game, resulting in Dorking’s equaliser.  Against the run of play, a cross came into the Angels box which was not dealt with. After attempts to clear, the ball fell kindly to Callum Kealy who smashed the ball into the net in the 35th minute.

Angels were spurred on, as they pushed forward to regain their lead in front of the cheering crowd. O’Sullivan and Tommy Wood combined on the right with quick passes to earn a corner. Angels continued their set-piece routine as Loft sent the corner in with Tom Parkinson rising highest, sending his looping header across goal into the top right corner above the man on the post in the 42nd minute.

The halftime interval did not stop Angels’ progress, as they extended their lead three minutes into the second. A standard cross that should have been collected by Slavomir Huk was fumbled, with Ibrahim Olutade on hand to tap in on close range.

The mistake summed up Dorking’s performance for the first hour of the game, a clear lack of creativity was combined with frequent misplaced passes. It was clear the visitors were not at their best, but any attacking intent from Dorking was dealt with by the Angels defence.

Jonathan Henly had little to do in the second half, but was forced into two saves in as many minutes, parrying a long-range strike over the bar before making a vital interception as Matthew Briggs was alone on the edge of the penalty area.

Angels put in a high workload to secure the win and it was clear the longer the game was going the more tired Angels became. When the final whistle was blown, several Angels players fell to the floor in exhaustion, a testament to the energy they put in to secure the first home win of the season which sends them to 13th in the National League South table.

Tom Parkinson: “Thanks for your support, that win was for you today especially after last week’s disappointing result”.

Man of the Match: Tom Parkinson – A stand out performance from the centre back. Commanded the defence with Miles and was a threat from every set piece. Superb finish to score Angels’ second.