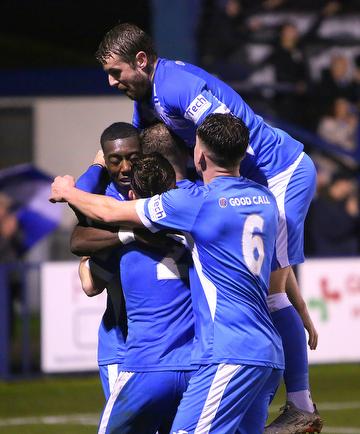 To win or not to win, that is the question

Despite taking the lead twice, Angels in the end had to settle for the draw against high flying Dulwich Hamlet.

With injuries taking a toll on Angels Boss, Steve McKimm’s selection opportunities, the players who took to the pitch did him proud with all of them putting in a tremendous shift and taking Dulwich right to the wire.

There was no Tommy Parkinson, Doug Loft, Craig Braham-Barrett or Ricky Modeste while due to illness Sonny Miles had only two hours sleep the previous night although with his performance you would never have guessed it.

One plus for McKimm was the return from injury of Adam Lovatt, while new signing Adam Coombes took a place on the bench.  Strikers Tommy Wood and Jake Embery started with Aaron Smith-Joseph and Joe Turner playing wide with the latter in a slightly unfamiliar right wing berth, but his man of the match performance was to prove how indispensable he is to the manager.

In terms of chances it was an even 1st half with perhaps Dulchich having the greater measure of possession.  For the visitors Giovanni McGregor, and Darren McQueen were asking plenty of questions of the Tonbridge defence while on 19 minutes a Jordan Higgs effort had Jonny Henly in the Angels goal scrambling across but the ball drifted just wide.

The home side were certainly not without threat with in particular the wing play of Aaron Smith-Joseph and Joe Turner stretching the Hamlet defence. On 28 minutes Smith-Joseph  having looked second best in a touch line tussle somehow managed to wriggle free from his marker and delivered a dangerous cross which Turner half gathered but was then upended by Andre Blackman.  The referee said penalty and Turner picked himself up and dispatched the spot kick past Charlie Grainger to give Tonbridge the lead.

On 35 minutes Angels perhaps should have doubled their advantage when Jake Embery found himself through on goal rounded Grainger but slightly over hit his shot and the ball drifted just wide.

The second half opened with a pile driver from Joe Turner but Hamlet soon made their presence felt with Stirling just wide with a header.  A few minutes later on 56 minutes Henly was forced into a fine save to maintain the Angels lead, but on 69 minutes Mills fed Green and the striker made no mistake with his effort to put Hamlet level.

At this point it looked perhaps as if the South London side might go on and win the game but Tonbridge had other ideas with Smith-Joseph on 79 minutes putting in a dangerous cross that Grainger seemed to fumble over the goal line.

The 83rd minute saw Dulwich get their equaliser when the ball was laid back to Jordan Higgs who let fly with an unstoppable shot into the top right hand corner.

To their credit in the closing minutes both sides went for the winner which meant chances at both ends, but the sides could not be separated.  The 798 spectators will surely have gone home feeling they had their money’s worth in witnessing an excellent advert for National South football.

Afterwards, Angels Assistant Manager, Barry Moore said: “I think a draw was a fair result, but I think we were on the front foot a lot more today.”