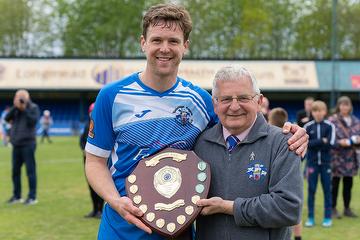 “We are staying up, we are staying up” rang out of the South Stand as two second half goals within a minute confirmed the Angels’ National League South status for another season.

Steve McKimm made two changes from the side that lost at Bath City on Saturday. Jerry O’Sullivan returned at full back which allowed Tom Beere to resume his midfield position whilst Ibrahim Olutade was selected up top with Ricky Modeste and Adam Coombes taking their places on the bench.

The first half was a nervy, cagey affair with very few chances being created by either side. An early raid down the left saw Craig Braham-Barrett fire into the side netting and a good shot from distance by Tom Parkinson tested ex-Angels goalkeeper, Lee Worgan, for the first time after 16 minutes.

But the best chance of the half fell to Eastbourne Borough when a right-sided corner saw Chris Whelpdale make a late run into the area to meet the cross with a firm header that was cleared from the line by O’Sullivan.

After such a quiet opening 45 minutes, nobody in the attendance of 1,238 was quite ready for the opening five minutes of the second half.

After 49 minutes, following good work initially from Braham-Barrett, Olutade wriggled his way to the bye-line from where he pulled back a short pass to the near post for Tom Beere to tuck home.

Within a minute, Tonbridge had their league safety completely in their grasp as Joe Turner drove into the right side of the box to fizz a low cross from which Jake Elliott turned the ball into his own net under severe pressure from Olutade.

The Angels were now rampant and were close to a third goal on 57 minutes when a short corner routine saw Smith-Joseph cross for Parkinson to head narrowly over.

A fine solo effort from Olutade ended with his curling shot drifting narrowly wide before substitute Charlie Walker forced Jonny Henly into his only real save of the half.

The game was seen out in relative comfort leaving supporters with the unusual celebration of spades in hand, digging up the pitch!

A delighted but reflective Steve McKimm commented after the game: “We’ve crossed the line and I’m pleased with that. But I cannot be shouting from the rooftops because we haven’t hit the heights I’ve wanted to.”

As is the traditional custom at the final home 1st team game the Supporters Player of the Season award is handed out together with the runner up.  This year that accolade was given to skipper and centre back Sonny Miles with midfielder Joe Turner as runner up.  Football is very much a game of opinions but I don't think too many will argue with the outcome of the vote.  There were some difficult moments through the campaign but the fact we have another season of National South football to look forward to results from those two players being a significant part in the Angels continuance at Non- League's Step 2. Well done both!