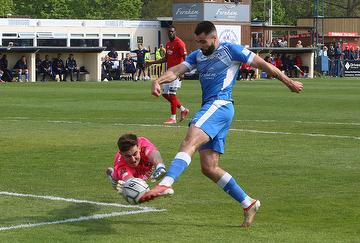 Ebbsfleet maintained their 3rd position in the table with what in the end proved to be a hard fought win against the Angels when perhaps it should have been easier for the away side who created countless chances in the second period to put the game to bed.

Assistant Manager Barry Moore went for just the one striker in this case Joe Turner more often to be found in midfield but has occupied the forward role in the past.  Ricky Modeste and Aaron Smith-Joseph occupied the flanks with Tom Beere in an advanced midfield position.  Doug Loft and James Taylor were placed in the heart of midfield while Jamie Fielding, Sonny Miles, Tommy Parkinson and Craig Braham-Barrett formed the defensive unit.

It was an entertaining first half with plenty of attacking football on show from both sides but it was Ebbsfleet who took the lead in the 6th minute after a good build up on the left with Coulthirst applying the final touch.

Angels responded with Modeste and Turner both showing for the home side but it was on 23 minutes when the hosts so very nearly equalised with Modeste one on one with Fleet keeper Moulden with Turner also in close attendance but the ball was eventually cleared at the expense of a corner.   It proved to be a succession of three corners for the Angels that were well delivered but there was to be no breach of the Fleet defence.

As the half ran its course there was a decent chance for Tonbridge’s Beere at the back post from Modeste’s cross but the Ebbsfleet were to go in at the break with the one goal advantage.

Clearly the half time team talk provided the away side with the impetus to take the game to their hosts. It was at times almost a procession of chances with Jack Paxman in particular causing all sorts of problems for Tonbridge defenders on the left flank.

The fact that the Fleet didn’t increase their lead was partly down to some tremendous work by the Angels back line who managed to get so many blocks in together with just basically inaccurate shooting.  Angels cause wasn’t helped by losing sub Teddy Perkins to injury  with all other subs used meaning they played the last 15 minutes with 10 men.

Despite that the Angels did rally somewhat in the last few minutes forcing some corners and set pieces with goalkeeper Henly joining the attack and they even had the ball in the net from a corner but Olutade was deemed offside and the strike was ruled out.

Ebbsfleet are able to look forward to the playoffs while Tonbridge Angels with results elsewhere look to be gaining a little more safety.

Afterwards Moore said:  “I thought we caused them a few problems 1st half,  particularly from set pieces and perhaps edged it but 2nd half they showed their strengths, fitness and experience.  These are a full time outfit so you expect it.  Obviously it didn’t help having to play the final stages with just 10 men due to Teddy’s injury but we gave it a go in the final stages.”