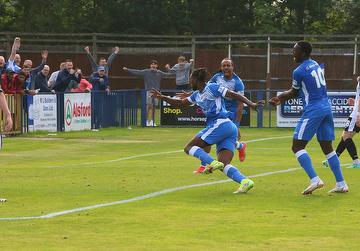 Angels equalise with last kick of the Game

Ibrahim Olutade came off the bench in the final minutes and prodded home in the eighth minute of stoppage time to earn Tonbridge Angels a deserved first point at home this season.

It was a lively start to the game from both sides, with Hampton & Richmond looking more dangerous on the attack whilst Angels were unable to keep hold of the ball.

Hampton & Richmond’s Jake Gray shot from the edge of the box in the 14th minute, forcing a save from Jonathan Henly who dived to his right to parry the shot away. A minute later the visitors had the best opportunity to open the scoring as Angels were unable to clear a corner.The ball dropped to Imran Uche who was unable to get enough power at full stretch.

Tonbridge absorbed the first 25 minutes of pressure and turned the game on its head with lengthy possession. Ricky Modeste and Aaron Smith–Joseph forced saves from Alan Julian, but Adam Lovatt had the best chance of the first half. Modeste laid the ball into Lovatt who cut inside and shot from the edge of the box, forcing Julian into a save at full stretch.

In the second half, Kadell Daniel almost broke the deadlock against the run of play as his shot from range was destined for the top right corner, but Henly got enough of a hand to push it wide.

Captain Sonny Miles’ strong performance was evidentby winning every duel and perfectly playing the offside trap when Hampton & Richmond were poised to be one-on-one with the keeper.

David Fisher opened the scoring for the visitors in the 78th minute. A foul was conceded on the edge of the box, and Fisher curled the resulting free kick into the top right-hand corner with Henly unable to get a strong enough hand to keep it out. Four minutes later Kadell Daniel should have sealed the game but sent a tap-in wide in front of an open goal.

Angels piled on the pressure in the final 20 minutes, owing to long injury breaks. Modeste was at the centre of the action, a header ricocheted off the bar from a corner before playing a one-two with Tommy Wood and sending the ball into Olutade who’s point blank shot was saved by Julian.

A frantic final two minutes ensued as Ryan Gondoh received two yellow cards for time wasting, one for taking too long to be substituted and the second for throwing the ball away. It was this time wasting that allowed Tonbridge to play on and score an equaliser as a long ball was knocked down by Miles, forcing Julian into a save. Olutade was on hand to hit the rebound into the bottom right corner to score the first league goal in front of the Angels fans this season, and to rescue a deserved point in the last kick of the game.

August’s player of the month Aaron Smith-Joseph said: “Delighted to get the point late on, all your support is always appreciated. We go again next week.”

Tonbridge climb out of the relegation zone to 17thposition and are away to Dartford on 11 September.

Man of the Match: Tom Beere - Settled in the midfield, created chances and was strong in defence.