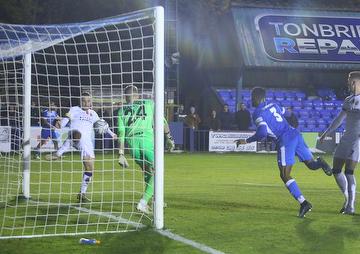 In a match they controlled for large periods, Angels through their inability to convert chances once again have ended up pointless.  The Havant & Waterlooville defence were forced to work very hard throughout the game but somehow managed to hang on to take all the points back to Hampshire.  A goal by James Roberts on 34 minutes following a mistake by Harry Hudson proved in the end to be the difference between the two sides.

Angels Boss Steve McKimm went with a more familiar looking 4 man defence allowing Ricky Modeste to push up on the right flank with Ibrahim Olutade the lone striker.  While at times Olutade threatened to outpace the Havant defence, he also outpaced his own team mates to find himself somewhat isolated.

The visitors arrived at The Halcyon Wealth Longmead Stadium short of 1st team regulars and then were forced into two very early substitutions due to injury and with Angels pressing for an early opener the scene was potentially set for a defensive masterclass from the Hawks.  And so it was to prove with the visitors relying on occasional breakaways as Angels continuously poured forward looking to break their current goal drought.

As early as the 9th minute Ibrahim Olutade who was working the channels with pace missed a glorious chance to put the Angels ahead following a Ricky Modeste quality cross. But it wasn't all Angels; on 16 and 28 minutes Jonny Henly in the home goal was forced into two fine saves.

And then on 34 minutes came the real game changer.  An overhit through ball from the Hawks defence appeared routine for central defender Harry Hudson to deal with but a loss of concentration brought about a terrible first touch that handed possession back to the visitors and with Angels defence out of position, Havant's James Roberts placed the ball past Henly and into the Angels net.

More pressure followed from Tonbridge in particular a 39th minute corner resulting in a scramble in the Havant box and then an incident right on the break that saw Hawks manager, Paul Doswell red carded and sent to the stands.  It would seem he intervened to the referee's displeasure following a 'handbags' incident between the two sides right in front of the away dugout.

Havant started the second period with a couple of corners but it was generally the Angels who had the possession but what use would they make of it.  Set pieces with skipper Sonny Miles in close attendance often seemed to provide a possible solution, but the Hawks defence was in mean mood with usually a head in the way and if that failed then goalkeeper Mannion was always alert and very much up to the task.

From the 77th minute Angels had two strikers to work the ball, Wood replacing Olutade and Hutchinson coming on for midfielder Smith-Joseph and there was certainly plenty of action in the Havant half for the majority of the 585 attendance to cheer on.

Havant were now however managing the game as much as they could to their benefit but it cost Mannion a yellow card for time wasting.  Good Angels chances came and went in the 81st and 84th minutes the latter producing a save on the line by a Havant defender.   Stoppage time saw efforts from Wood and Joe Turner but by then probably most in the ground had that feeling that this wasn't going to be Angels night despite all the pressure.   And so it was with the referee playing four minutes of stoppage time.

Afterwards 1st team Coach,James Scott, said: "It wasn't our night, we were brilliant both halves, the endeavour was fantastic, but we do have to put the ball in the net."

A total of eight players (4 for each side) were cautioned by referee Danahar, as well as the red card for Doswell, in what was an intense battle between the two sides but never a dirty game