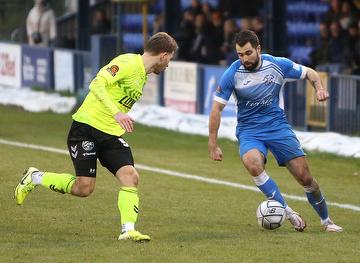 Angels grateful for the point

Angels Boss, Steve Mckimm was philosophical over his team’s failure to gain maximum points at home to Hemel Hempstead Town.  “Our visitors are a very good side particularly away from home and they created more chances than we did so might feel they should have taken all the points.  Despite overall being second best I’m very pleased with the performance put in by my players this afternoon.  Remember they had a long trip to Chippenham midweek where they got maximum points but would have got back home very late and then off to their day jobs the next morning.  They are tired but out there today they have done their level best to get something from the game.  We’ve taken 7 from 9 points in the league and that’s very solid progress.”

The Manager named an unchanged starting line up to the victorious one at Chippenham in midweek.  The only change was on the bench where Tom Parkinson took the place of Jake Embery.  Crystal Palace U23 loanee James Taylor played his first full 90 minutes and looks to be building a good understanding with Adam Lovatt that bodes well for the future particularly as both players will be staying at Longmead until the end of the season.  .

There was only 8 minutes on the clock when a horrible misskick in the away defence presented Joe Turner with the easiest of tap ins to open the scoring for the hosts.  It seemed to galvanise Hemel Hempstead into action who from then on largely took control of proceedings creating numerous chances including a goal on 25 minutes through Charlie Hughes.  It could have been so much better for the Tudors with Ceruli, Castiglione and Williams all guilty of missing opportunities.

It was a much more even affair in the second half which saw Harry Hudson for the home side make a great run into the Hemel area after 50 minutes and then James Taylor at the same end blasted over after excellent hold up play from Joe Turner.   The home side were enjoying a good spell at this stage when on 61 minutes Tommy Wood laid the ball back to Braham-Barrett with the Angels midfielder just over with his effort.

Scott-Morriss for the visitors forced Henly into a decent save on 62 minutes but in truth the game began to peter out in terms of goalmouth action.  Both teams continued to huff and puff but it looked as if the stalemate was going to prevail although Henly was called into a great save near the end while also in stoppage time launched a thunderbolt from the edge of the area and was deflected for a corner but the set piece was efficiently dealt with by the Tudors.

On their first half performance Hemel Hempstead might be a little disappointed they didn’t take all the points but rather like the Angels they have been guilty at certain times during the campaign of not taking their chances.