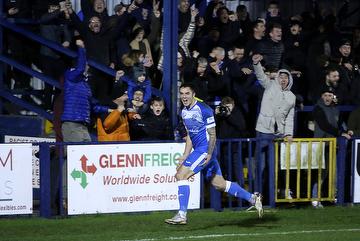 Angels came from behind to secure their first league win since late October after two goals from substitute Tommy Wood ensured the fans who braved the torrid weather went home happy.

It was an enthralling game for the Angels, with both teams starting well and having opportunities to open the scoring in the first 15 minutes. Jonathan Henly denied Hungerford’s Sol Wanjau-Smith early on by diving low before Jake Evans stung a long-range effort onto the underside of the Angels crossbar. Tonbridge almost broke the deadlock as Luke Jenkins rose highest to meet Joe Turner’s free kick, with his header narrowly going wide of the post.

Angels dominated possession for the remainder of the half, but Hungerford opened the scoring against the run of play as the Angels defence failed to clear the ball which kindly fell to Jake Evans, who calmly beat Henly at the near post to put the visitor’s ahead in the first minute of added time.

Angels started the second half in the same vein as the first, but Hungerford were denied a second goal by a stunning last-ditch tackle by Adam Lovatt. Henly took a free kick on the halfway line, which eventually fell to Hungerford’s striker who was about to strike into an empty net before Lovatt stuck out an important leg to deny.

The game changed completely in the 64th minute as the visitors were reduced to 10 men as the already booked Louis McGrory was shown a second yellow card for fouling Luke Jenkins in the penalty box following a corner melee.

Joe Turner stepped up to take the penalty, but Luke Cairney dived well to his right to hang onto the ball and deny the equaliser.

Despite the advantage, Angels failed to have the golden opportunity to equalise until late on. Turner had a shot blocked from the edge of the box, and substitute Ibrahim Olutade headed wide whilst unchallenged in the box.

Substitute Tommy Wood made the difference after being on the pitch for a matter of minutes, as Joe Turner’s shot from the edge of the box fell at the striker’s feet and he smashed the ball into the net in the 86th minute in front of the loud Angels fans.

Angels almost took the lead two minutes later as Wood laid the ball off to Tom Beere, but his first-time effort was saved dramatically by Cairney.

Angels threw everything at Hungerford to earn a winner and got what they deserved in the eighth minute of stoppage time. Craig Braham-Barrett combined with Wood by sending in a low cross which Wood hit with the outside of his foot to beat the keeper at the near post, sending the rain-soaked Angels fans crazy.

Angels stay 19th in the National League South on 17 points and play at home on January 15 in the fourth round of the FA Trophy against National League Premier’s King’s Lynn Town.