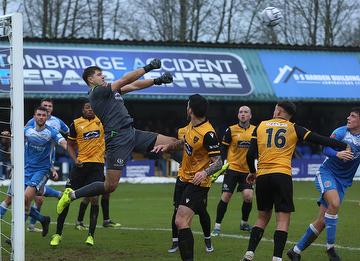 The problem with local derbies is that the pre-match hype often doesn’t equate to the football offered up on the day and so it proved with this rather tame encounter between two Kent traditional rivals. Of course the visitors Maidstone United will be the happier of the two teams with doing just about enough to win the game but it was hardly title winning fare.

The hosts Tonbridge Angels by contrast still have the problem of failing to consistently find the back of the net and until they do they will continue to occupy the lower reaches of the Vanarama National South table.

A tight and at times rather flat 1st half with few genuine chances saw the Stones go into the break just the one goal ahead which on the overall reflection of play was probably about right.

A free kick for the visitors after two minutes was well over the bar and a couple of minutes later Angels Joe Turner effort from just outside the area drifted just wide of the right hand post.

On 12 minutes Angels were under pressure again from a free kick but a block averted the danger.  The reprieve was not to last long however when on 16 minutes Michael Phillips, following some great interplay by Maidstone which out manoeuvred the Angels defence, was able to pick his spot to put the visitors  one up.  There may have been a foul by Maidstone in the build up but it wasn’t convincing.

There followed a period of some tough tackles perhaps to be expected in a local derby and the game threatened to come to life in a serious way but caution seemed to be the watchword for both sides as defences continued to be on top.

There were a few flurries from Maidstone most notably efforts from Regan Booty and Sam Corne but things were largely a stop start affair with little to get the large crowd of 1,669 off their feet.

The Angels improved in the 2nd half probably with words from boss Steve McKimm still ringing in their ears.  Indeed they should have drawn level within a minute of the restart.  Adam Coombes found himself one on one with Stones keeper Tom Hadler but his shot was tame and easy for the former Angels custodian.

In a way that miss rather set the scene for the Tonbridge 2nd half performance.  There was much more possession and play within the Maidstone half but its goals that count and somehow those didn’t look like coming for the team in blue.  To be fair Maidstone were even less potent but they did have that one goal advantage, and with a more than competent defence, it was for Tonbridge to work out how to make the breakthrough.

Aside from that Coombes miss, there were few oohs and aahs from the fans behind the Maidstone goal.  In the 85th minute substitute Jake Embery turned well in the box and  got his fierce shot away but the deflection took the sting out of it.  Joe Turner’s hit in stoppage time will surely have been described as ‘regulation’ by Hadler.

In truth the Stones saw out the last few minutes without any real scares and were able to celebrate the win with their travelling support a few moments later.

Afterwards, McKimm said ‘he was bitterly disappointed’ with the overall performance by his players.  “I expect my players when they come off the pitch in a local derby or indeed any match to be totally exhausted but I didn’t feel that was the case today.  With all due respect to Maidstone there was nothing that we saw that should make us fearful but we’ve ended up with nothing and that’s frustrating.”

But of course it might be argued this is only Part 1 of the encounter with the two teams due to meet again on 2nd January at the Gallagher Stadium (KO 3:00pm)