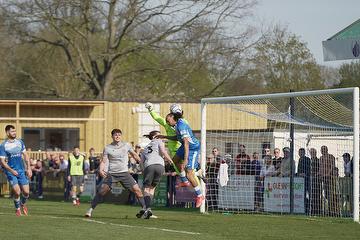 The Angels for some reason put in one of their worst performances of the season which of course did absolutely nothing towards their efforts to pull away from that one relegation spot.  Results elsewhere have not materially damaged their position in the league but in view of some of the fixtures coming up, with all due respect to Slough Town, this game did represent an opportunity to gain some valuable points. Instead it was the Rebels who gave the lesson in controlled and incisive football generally meaning the hosts were doing the chasing on a hot afternoon at the Halcyon Wealth Longmead Stadium.

Angels Boss, Steve Mckimm quite reasonably went for exactly the same lineup that performed with efficiency at Chelmsford City last Saturday to gain a valuable point, but to be honest it could have been a team of complete strangers so much were the Angels lacking in footballing acumen .

Slough Town deservedly picked up a valuable three points which surely guarantees their immediate future in National League South. Tonbridge Angels on the other hand will be looking anxiously over their shoulders as they still have work to do to continue their stay in non-league’s step 2.

It was a first half of few chances and what there were came from the visitors. On 5 minutes Slough’s no 8 tried a shot from just outside the area but it was comfortably over the crossbar.

On 12 minutes the first proper Tonbridge attack saw Wood hold the ball up well and put O’Sullivan in but the wing back’s cross was wide. Five minutes later O’Sullivan and Joe Turner combined well for the hosts on the right wing but North in the Rebels goal was equal to the task and from his long throw Slough nearly opened the scoring with a dangerous breakaway.

On 25 minutes another dangerous attack from the Rebels was eventually dealt with by the Angels defence and it was the visitors who ended the half stronger with a dangerous looking free kick on the edge of the Tonbridge area but it was somewhat wasted due to a player misunderstanding.

The second half was only 4 minutes old when the only goal of the game came. An amazing run from deep in his own half by centre back Joe Dandy passing four Angels players before his cross from the right was completely missed by a bemused Angels defence which simply left Tenconi with a fairly easy tap in.

If you thought Slough were simply going into defensive mode following their strike then you would be wrong. It was the Rebels that continued to make the chances against a strangely lethargic Angels.

Half time substitutions which left the home side with only one striker probably didn’t help the cause but the home support would have expected far more from their team bearing in mind its position in the table.

A Harry Hudson cross which North had to palm away for a corner and a Turner effort which was straight at North following a rare Slough defensive mix up were probably the only moments of note for the Angels fans in that 2nd period.

Afterwards, Mckimm was scathing in his comments.  “We were diabolical today and I will have to review the video to see what sort of a team I’m going to select for Dulwich Hamlet on Monday afternoon. “

Two Angels strikers were left kicking their heels on the bench when the final whistle came and surely Angels supporters much have been wondering how that situation arose.  In particular, Jake Embery must be wondering what he must do to get into his manager’s National League South plans particularly after scoring one and a significant assist for the other in a 2-2 draw at Welling United the previous Tuesday in the Kent Senior Cop.