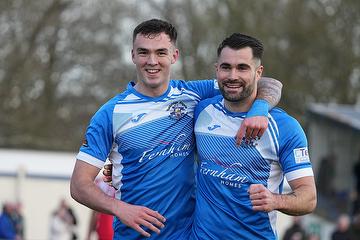 Tonbridge Angels edged a tense, relegation six-pointer by a single first half goal, leaving Welling United at the foot of the table.

Two nervous sides completed the opening 10 minutes with neither side wanting to make the first error. A ninth minute through ball from Tom Beere saw Welling goalkeeper Coniah Boyce-Clark advance beyond his area to clear, but four minutes later it was an error from the Wings keeper that gifted the Angels their opening goal. Tommy Wood moved the ball on from a long clearance into the path of Joe Turner whose low shot squirmed from the keeper’s grasp onto a post where Wood was on hand to touch home the rebound.

Welling forced a succession of corners through the half but Tonbridge defended them without too much alarm.

The second period saw the Angels with a far greater share of possession and the better of the chances. Turner saw his 46th minute effort well saved by Boyce-Clark and a 58th minute corner saw a Perkins header safely into the goalkeeper’s hands.

Welling’s best chance of the game came on 66 minutes when Dipo Akinyemi’s cross begged a touch but eluded Bradbury.

Good combination work from Wood and Coombes saw the latter’s shot deflected away and when Wood broke away with 10 minutes remaining, Boyce-Clark blocked the first effort and also the follow up attempt from Coombes.

Tonbridge saw the game out with little alarm to accrue the three vital points that sees them now six points clear of their visitors.

Steve McKimm commented after the game: “I felt we were solid at the back, midfield and up front. It wasn’t a game for the purist but I’m not interested in that. We need points to stay in the league and we got three of them today.”

Photo by Wesley Filtness of Tommy Wood (l) after scoring Angels' only goal celebrating with Joe Turner who had the assist. All Angels' photos can be found at www.wezpix.com (All match photos available to buy)