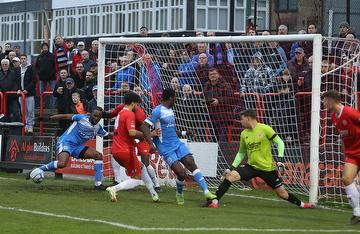 Angels Boss Steve McKimm has a riddle on his hands.  How do you get a team which for the most part is playing decent football to actually score goals. For the fourth successive Vanarama National South fixture his side has failed to score a single goal - not even a consolation strike.

It’s not for lack of effort there’s plenty of that, but that ability to read the opportunities isn’t quite there at the moment.  Take this afternoon for example, Welling’s goalkeeper was their Man of the Match which tells you everything about the efforts of the team playing in blue.

McKimm went with just the one striker, Ibrahim Olutade, with Doug Loft restored to midfield and Tom Parkinson back in central defence.

In fact for the first 20 minuets of the game the Angels were the better side by some distance.  Ricky Modeste produced a string of quality crosses, one of which should have been buried past keeper, Jack Sims.  In the centre Adam Lovatt was pulling the strings and was causing problems for the Wings defence with some pinpoint passes.

But as so often with the Angels this season, just when everything was going according to plan, a basic error deep in Welling’s half near to the touchline, saw the ball expertly passed to ex Angel Bradley Stevenson who although still having much to do took his opportunity really well to put the home side one up on 22 minutes.

They say goals change games and that was certainly the case for the next 15 minutes. Welling should have doubled their advantage within a couple of minutes of scoring but Angels survived and indeed the following 15 minutes during which Welling were able to push the ball around with some degree of confidence.

Having ridden that particular storm as the break approached Tonbridge were very much taking control once again but still that strike wouldn’t come.  Tom Beere produced a cross which just needed a touch, there was a Modeste effort and Ibrahim Olutade set up by Jerry O’Sullivan saw his shot deflected for a corner.

Whilst Jonathan Henly did have to make a couple of decent saves early in the second period most of the action was to take place in the Welling half and most of the possession belonged to Tonbridge.  Olutade was through on 47 minutes but somehow managed to balloon his effort high over the bar and a couple of minutes later the same player combined with Beere the latter again producing a very dangerous cross but again no-one on the end of it.

Tom Parkinson was always a threat at set pieces but couldn’t get the accuracy required but it was on the 55th minute when following intense Angels pressure in the box, Sims pulled off a remarkable double save to keep his team in front. There was a further chance for Olutade before he was replaced by Jake Hutchinson and there were now two strikers with Tommy Wood already on for Aaron Smith-Joseph.

It was making a difference with Craig Braham-Barrett providing good support on the left wing and you felt that Angels were now really starting to knock on the door. The point was would it open.  The ever willing Beere cracked a first time shot from the edge of the area but just wide but the pressure was still very much on from the visitors.  A Henly free kick found its way through to Modeste but he couldn’t quite take advantage and then there was Sonny Miles playing up front in the last few minutes with a header but relatively straightforward for Sims.

The hard truth was that Angels were heading for another nil return from their perspective despite taking the game very much to their hosts.  This has now become a serious problem for McKimm as he sees his side slowly slide down the table.   And of course loyal Angels supporters are becoming increasingly concerned with, for some of them, patience just starting to wear a little thin.