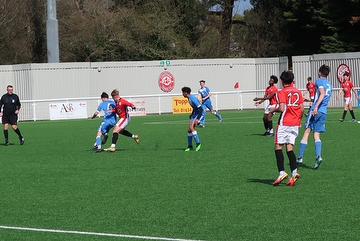 Tonbridge Angels Academy stretched their lead at the top of the National League Alliance with a fine 4-1 win over a very useful Chatham Town side at the Bauvill Stadium.

There are hurdles for both Tonbridge and Bromley, who mathematically are now the only challengers, but the table is shaping towards a monumental match on 27th April..

There was a bitterly cold wind and snow in the air as the two teams took to the pitch but it was the Angels that got off to a red hot start, taking the lead after just three minutes. A ball forward from Tom Green was collected by Fin Hartley who opened up the Chatham defence with a superb pass that allowed Ben Hermitage to round the goalkeeper before slotting home a composed finish.

Chatham might well, in fact should have, equalised within a minute. A free kick, awarded just outside the box, from Callum Kirwood-Slack struck the bar with the rebound headed over with the goal at their mercy.

A very even game ensued for the best part of the first half with, for Tonbridge, Hartley’s pace causing the Chats defence serious problems and Kirwood-Slack and Lewis Bain doing likewise for the Angels backline.

Hartley broke clear just past the half-hour but was denied by the advancing Chatham goalkeeper, Harvey Mills and, from the resulting corner, Joe Tyrie leapt the highest but his header cleared the bar and three minutes later, Hartley broke clear again but his finish was over the bar.

It was the Angels that were creating the chances and just prior to the break they fashioned a superb goal, later described by Academy boss Tommy Parkinson as the best of the season. In a tight area with one touch passes, Josh McArthur, Ben Hermitage and Hartley opened up a shooting opportunity for Luca Woodhouse who curled his shot into the top corner.

Within a minute, Tonbridge took a three goal advantage into the break as Tom Green powered a header home from a corner. The 3-0 half-time scoreline was a little harsh on Chatham but it certainly reflected a fine half from the visitors.

The second half, from an Angels point of view, didn’t quite reach the heights of the first but the game was put to bed after 56 minutes when Hermitage set up McArthur, who had been devilishly good, for a deserved goal.

Tonbridge lost a little of their momentum when the influential Woodhouse left the game and Chatham found a foothold and they were eventually rewarded eight minutes from time when Kieran Jordan did well before pulling the ball back for Joel Biring to fire home a consolation goal.

There was disappointment for the Angels when debutant Dylan Williams was harshly sent off, deemed to have been the last man after a foul, with the free kick going over the bar in what was the last kick of the match.

Tommy Parkinson commented after the game: “It was a dominant performance from the Elite squad against a well organised Chatham team. Our levels dropped in the second half, but some excellent football played in the game.”