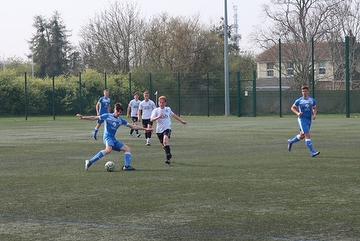 Two pieces of calamitous defending from the hosts, Dover Athletic, coupled with a strong defensive performance from themselves saw Tonbridge Angels Academy stretch their lead at the top of the National League Under-19 Alliance to five points with four games remaining.

After dominating the early stages of the game, forcing a couple of corners, Tonbridge were gifted their lead on nine minutes when a misunderstanding between goalkeeper and defender saw a pass back evade the keeper and rebound off the post to the alert Fin Hartley who was able to walk the ball into the net.

The visitors continued to hold the ascendancy and from several corners won, Shea Brennan saw a header saved by Cameron Davey after 18 minutes and likewise from Joe Tyrie six minutes later.

Cameron Wootton and Ben Hermitage combined well to force Davey into another save and the game was into its 36th minute before Dover forced their first corner following a free kick from Teddy Isaacs that found Ewan Sallis.

After 52 minutes, the Dover back line was guilty of a second piece of miscommunication in defence when a long ball forward from Tom Green saw Josh McArthur get between a hesitant goalkeeper and defender to roll the ball into an empty net.

Without being at their attacking best, the Angels controlled the game completely restricting their hosts to the point that Nat Gibb, in the Angels goal, was asked to make his only save of the game, a comfortable one at that, after 70 minutes.

A fine move involving Ben Hermitage, substitutes Billy Robbins and Billy Kent ended with the latter seeing his shot well saved at the near post by Davey.

A couple of set piece headers from Tonbridge’s solid central defensive pairing of Tyrie and Green might have added to the scoreline before the final whistle but it was their work at the other end of the pitch that laid the foundation for this victory.

Tommy Parkinson commented after the game: “Not the best of performances against a good Dover team who played well throughout. We were solid defensively and clinical with our chances but need to improve in future games.” And paying tribute to his captain Joe Tyrie: “It was another solid performance from Joe who did his job excellently from the first minute to the last. Joe is a man playing boy’s football these days and is developing into a top centre back with massive potential to do well in the game.”