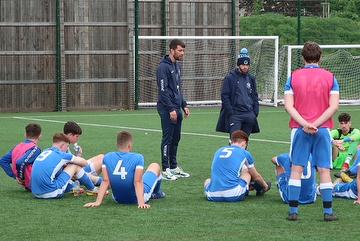 Angels bow out on penalties in Champion of Champions competition

Tonbridge Angels Academy bowed out of the Champions Cup following a penalty shoot out defeat at Enfield Town after a hard-fought game finished 1-1 at 90 minutes.

The game had a bizarre start when the referee failed to arrive. After some frantic phone calls from the Enfield officials, a substitute referee was found but because he would not be arriving for the best part of an hour it was decided to start the match with members of the home side’s staff officiating. After seven minutes, Enfield opened the scoring with a goal that was clearly offside and as a result, the Enfield management called a halt and ordered a restart when the proper referee arrived.

Enfield were the quickest out of the traps on the restart, forcing Nat Gibb into a save after four minutes and Tom Green made a fantastic goal line clearance to deny them after some fine work down the right had left the Enfield man with what appeared to be a tap-in moments later.

The Angels weathered the early storm and started to make an impression on the game with Luca Woodhouse having a shot saved and following a good build up involving Joe Tyrie, Shea Brennan and Mason Nicholls, Woodhouse fired over.

In the final minute of a thoroughly entertaining first half, a short corner routine saw Tyrie head against a post from the resultant cross by Rhys Anderson and in added time another corner was headed back across goal by Tyrie to Green who headed it down for Fin Hartley to stab the ball goalwards but the keeper was down to save.

Tonbridge carried the momentum from the end of the first half and opened the scoring after 52 minutes when Brennan’s pass sent Hartley clear to despatch past the advancing keeper.

Enfield seized back the initiative and had a couple of chances before Noel-Williams scored with a good header at the far post.

Noel-Williams was to the fore again as Gibb did well to save at his feet and the game became stretched with chances beginning to appear at both ends of the pitch.

Leo Vowles was narrowly wide; Woodhouse saw an effort saved whilst Enfield also had their chances to win the game before the game went to penalties.

Gibb saved Enfield’s first effort and Sam Grant scored to give the Angels the advantage but three subsequent saves from the Enfield goalkeeper and three successful spot kicks saw Enfield into the quarter finals.

Tommy Parkinson was pleased with his young squad’s display commenting: "A really good performance from our scholars with 8 x 1st years in the squad against a 2nd/3rd year team. Better side for long periods and unlucky not to go through."