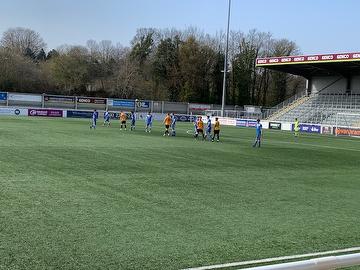 Tonbridge Angels Academy produced a masterclass in defending and two moments of quality to emerge from the Gallagher Stadium with maximum points in their top of the table clash with hosts, Maidstone United.

Maidstone might well point to a greater share of possession but a resilient back line restricted the home side to just one meaningful effort on goal that required Tonbridge goalkeeper, Nat Gibb to turn the ball over the bar before they struck a final minute consolation goal.

Maidstone’s sole moment to test Gibb came in the 11th minute when good work from Jack Muir set up a shooting opportunity for ex-Angel Nathan Jeche but his effort was capably turned over the bar and, from the resultant corner, Max Proven headed harmlessly over the bar.

The Angels went ahead after 17 minutes when a superb through ball from Luca Woodhouse sent Fin Hartley clear and the cool-headed striker finished well past the advancing Maidstone goalkeeper, Harley Earle.

Maidstone dominated the first half in terms of possession but a 20 yard effort from Proven that sailed over and efforts from Jeche and full back Ayo Tijani that were comfortably dealt with by Gibb were as good as it got for a side that made their frustration all too apparent.

First half efforts from Ben Twist and Elliott Duncan worked Earle but were comfortable saves.

The second period opened with Tonbridge showing greater attacking intent and Earle was stretched within the first minute, saving low to his left from Twist.

A cross across the face of goal from Ben Hermitage begged a touch and the midfielder was denied at the goalkeeper’s feet after being sent clear by Hartley as the Angels enjoyed a period of ascendancy that was rewarded with a second goal on the hour when Hermitage played the ball through to Duncan who raced clear to slot past Earle.

Substitute Billy Kent was enjoying himself on the left wing producing runs that were desperately defended for corners.

As Maidstone searched for a way back into the game, skipper Alfie Giles was instrumental in most of what they created and a 71st minute cross brought a heart-stopping moment but nobody managed to get on the end of it and Tyrie needed to be at his resilient best to deny Giles at the expense of a corner.

A minor disagreement saw Maidstone’s Morgan Todd and Joe Tyrie into the book as frustration boiled over. Duncan and Kent both had late opportunities to put the game to bed in the last five minutes and with the clock entering the last minute of time added, Jeche produced a shot from 20 yards that found the net via the underside of the crossbar to deny the Angels defence a well deserved clean sheet.

Manager Tommy Parkinson praised his team’s performance: “A fantastic win against a very strong Maidstone team. We defended brilliantly all game and had two moments of quality to win the game.“

Tonbridge moved two points ahead of Maidstone at the top of the table with three games in hand and now need to consolidate their place with another away game on Wednesday against Charlton Athletic Trust.