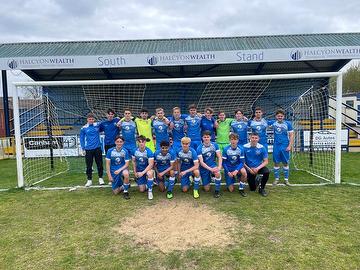 All square for Angels Academy against the runners up

If anybody thought that our Academy’s title confirmation last week would render the fixture against runner-up Bromley meaningless, then think again!

Without any question these two sides are the best in the division with literally a fag paper between them. Back in November at Hayes Lane, Tonbridge fought a magnificent rearguard display to return home with a single goal victory and today, at Longmead Stadium, a hard fought game with no quarter given and certainly none asked ended in a 1-1 draw which was the least that both sides deserved as Bromley enjoyed the best of the first half whilst Tonbridge fought back to earn their point with a late goal.

In terms of clear opportunities, neither side were able to create much in a first half that Bromley dominated. The Angels had an early chance on eight minutes when Bromley goalkeeper, Cemal Osman, saved from Cameron Wootton and it was another half-hour before anything further was created, at which time Bromley had a goal from Tyler Lochner disallowed for offside.

Although chances had been thin on the ground, it was a fascinating encounter.

The beginning of the second half saw Tonbridge making their second substitution with  Sam Grant replacing Billy Kent whilst a first half injury to Shea Brennan had seen the introduction of Mason Nicholls.

Bromley opened the scoring on 51 minutes when a cross into the box from the right saw a misplaced clearance under pressure fall to Will Street who scored from close range.

The Angels went in search of an equaliser from the restart with Luca Woodhouse becoming increasingly dominant in midfield and he saw a good effort deflected away for a corner on 56 minutes.

A corner on 76 minutes saw a melee in front of the Bromley goal that ended with Kian Austin stabbing the ball narrowly wide and, two minutes later, Osman saved well from Woodhouse at his near post.

Bromley had a chance to stretch their lead with seven minutes remaining with Nat Gibb saving well from Noah Joyce and that save proved vital within 60 seconds when a cross into the area from Tom Green saw Woodhouse head the ball back across the face for Ben Twist to fire home from 10 yards.

Tonbridge threw everything forward in search of a winner with Woodhouse being denied again and there were claims for a penalty when substitute Will Saunders was felled in the box but the referee waved away the appeals.

For the penultimate game on the hallowed turf of Longmead this was a memorable encounter and Tommy Parkinson was full of praise following the game: “A fair result against a good Bromley side who were the better side for long spells. It has been a fantastic season from the squad and now on to the champions of champions game next week.”