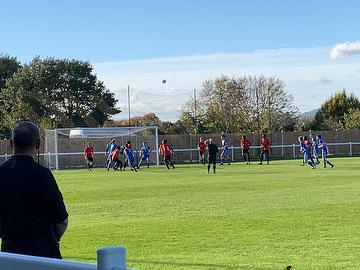 The Angels Academy slipped to a disappointing defeat to a hard-working VCD Athletic on Thursday afternoon.

In the midst of half-term, Tonbridge were short of some regular starters with Luca Woodhouse a significant miss, but we have to guess that the visitors encountered similar problems.

The first 20 minutes were fairly even although the better chances were created by the Angels. A teasing cross from Leo Vowles narrowly missed Cameron Wootton’s slide at the far post and on 16 minutes, the VCD goalkeeper performed heroics as he kept out an opening attempt from Vowles as he cut in from the left and then managed to parry follow-up shots from Wootton and Ben Hermitage before the ball was cleared to safety.

Tonbridge got their noses in front after 22 minutes when a punt out from defence was headed on by Wootton leaving Fin Hartley to outpace his marker before drawing the goalkeeper and sliding the ball into the bottom corner.

In fairness, Tonbridge were the better side in the first half and had they taken their chances they could have gone into the break two or three goals to the good with Joe Tyrie putting a header wide and a corner from Ben Twist coming directly back off the bar with the resultant rebound being scrambled to safety.

After an early second half chance for Wootton went begging, VCD took a grip of the game and were not to relinquish it for the remainder of the game.

VCD worked really hard, pressed from the front and in the second half showed more energy than the Angels were able to give. Their equaliser came five minutes into the half when the centre half met a right-sided corner with a towering header that gave the Angels goalkeeper, Nathan Carter absolutely no chance.

After several near misses for VCD with very little in the reply from the Angels, the visitors took the lead after 76 minutes when the ball somewhat fortuitously deflected into the path of the VCD left winger who clinically finished.

It was a jolt that did prompt a response from the Angels but they were not able to break down the visitors resilient defence.

Manager Tommy Parkinson whilst disappointed with his own team’s performance was fulsome in his praise for the visitors: “It was boys against men for the majority of the time today. VCD worked exceptionally hard, won every tackle, header, first ball, second ball and well deserved their win today.”